Apple Watch usage is dropping off as the novelty factors fades away, according to a new study. While Apple’s wearable has found a place in many owners’ gadget ecosystems, the device is still viewed as distinctly nonessential.

However, the new report includes a list of users’ desired features for Apple Watch 2 — and many of them are things Apple is supposedly working on already. 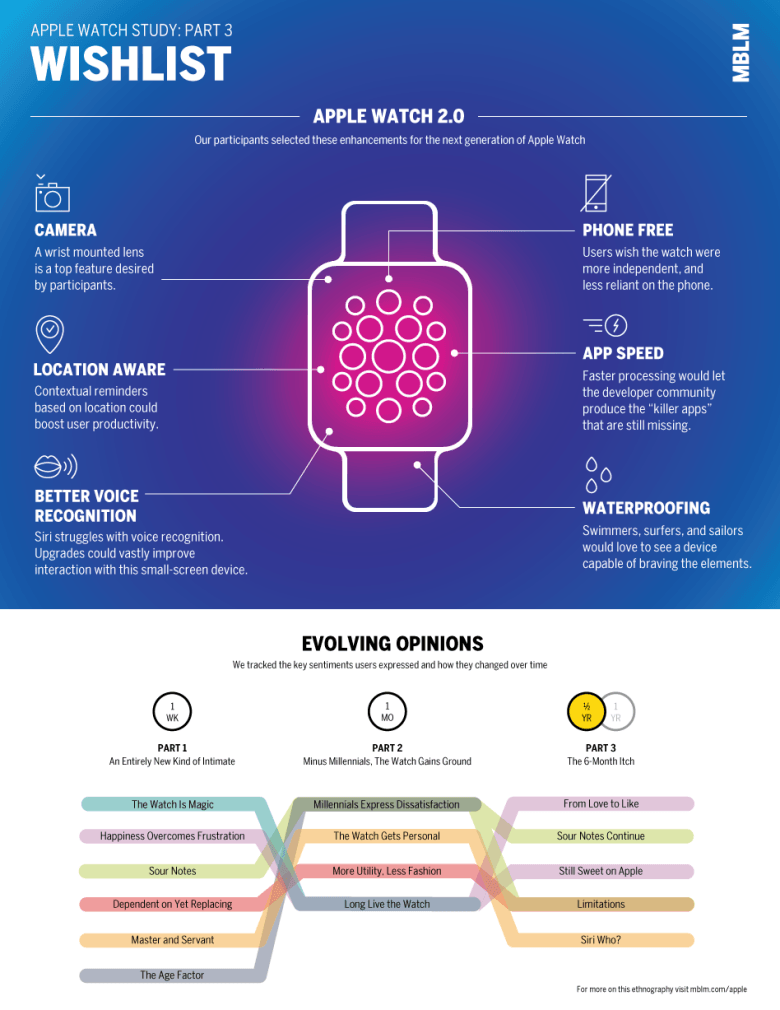 The need to tether the first-gen Apple Watch is a major gripe about the wearable, according to the study, which was conducted by MBLM, a “brand intimacy agency” that has been running regular reports on Apple Watch during its first year.

Users are constantly, and perhaps unfairly, comparing the Apple Watch to the more than six generations of iPhone evolution.

Apple Watch owners also say they mainly use the device for one specific function, like notifications or activity tracking, and that the device’s lack of responsiveness makes switching apps cumbersome. Most admit they do not use Siri regularly, in what is possibly the clearest example of how the device’s sluggishness frustrates users and creates unnecessary friction.

“It’s surprising that even when we forced our panel to separate from the watch for an extended period, most of them didn’t miss the device,” said Mario Natarelli, MBLM’s managing partner. “We have seen our panel change its behaviors and attitudes over the past six months and identified a clear sense of the limitations, barriers and opportunities wearable technology is creating.”

MBLM’s ethnography study is a year-long examination of Apple Watch users aged 13 to 65 years. Overall, findings comprise approximately 1,500 open-ended responses and 45 hours of video footage. You can check out more information about the study here.

Fortunately, a lot of these issues seem to be things Apple is working on for the Apple Watch 2. Previous rumors suggest that the wearable sequel will retain the same size, shape and resolution as its predecessor, but will feature a larger battery, added FaceTime camera and greater independence from the iPhone. Additional high-end models costing $1,000-plus are also supposedly in the pipeline.

Do you agree with the conclusions drawn by MBLM? Leave your comments below.