A new controversy is brewing online after it’s been revealed that not all iPhone 6s units get the same amount of battery life. The apparent culprit? The new A9 processors, which power Apple’s latest iPhones and were sourced by two chip manufacturers.

Apple dual-sourced A9 production from Taiwan Semiconductor Manufacturing Company and Samsung. While it was discovered earlier that the two chips aren’t the same size (the smaller Samsung A9 processors use a 14-nanometer processor while TSMC used a 16-nanometer process), some early testing has revealed that Samsung’s A9 chip has much worse battery performance than TSMC’s A9. 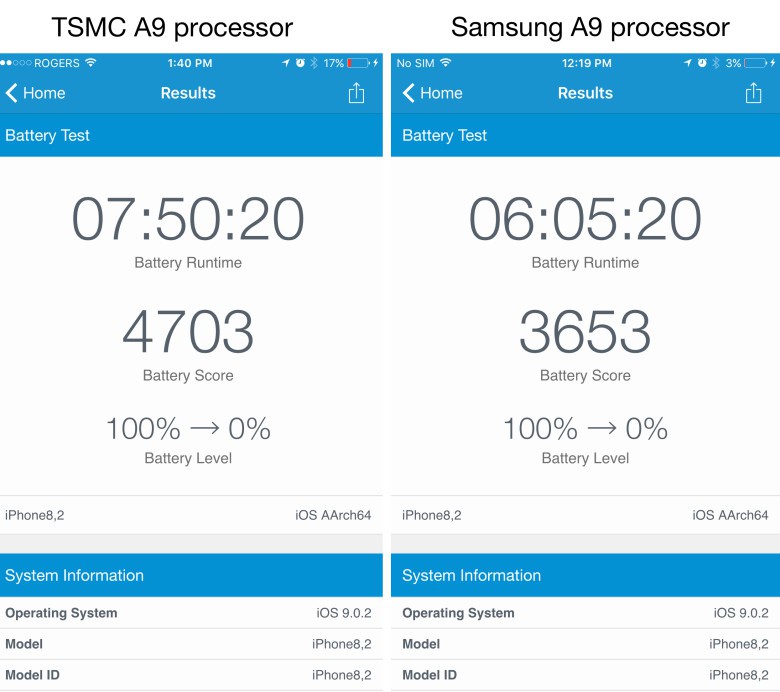 “Ran this test a couple times and results were consistent,” wrote Raydizzle on Reddit. “Always about a 2 hour difference in duration. Both phones were tested using the same backup, same settings. Also tried testing them as new phones and results were similar.”

Based on some early metrics, it appears that nearly 70 percent of iPhone 6s Pluses have a TSMC processor, while only 40 percent of iPhone 6s units have the TSMC A9. Apple’s website claims that iPhone 6s users can expect 14 hours of talk time on 3G and up to 11 hours of video playback. However, it fails to mention that your battery experience could be radically different based on which processor you randomly receive.

There’s no way to tell if you’re buying a Samsung A9 processor or a TSMC A9 processor when you purchase your new device online or in stores. However, if you want to know which chip your iPhone 6s is packing, you can download the free app Lirum Device Info Lite to discover which processor you’re packing.

Simply open the app after downloading and look under “Model” on the main page. If your model is N66MAP or N71MAP, you’ve got a TSMC chip. N66AP and N71AP models contain a Samsung chip.