Classic video game series, Worms, is getting a new installment on iOS in Q3 of this year with Worms 3 set to blast its way to the iPad, iPhone, and iPod touch in a couple of months.

Interestingly, Developer Team 17 has made this one as an iOS exclusive, skipping other platforms it’s been on since the first Worms came out in 1995, like the Mac, PC, PlayStation, Xbox, and various handheld gaming devices.

The new game follows up the 1997 Worms 2 game, making Worms 3 a hotly anticipated title for iOS, indeed, as there have only been a bunch of add-on and experimental 3D games in the series since then.

Worms is a turn-based strategy game in which each team uses artillery to bombard the opposing army of Annelids until they have no more hit points left, or they surrender. Worms 3 should have a similar mechanic, with turn-based, asynchronous multiplayer online play, making matches between friends that much easier. Pass and Play local multiplayer will also be possible for up to four players. 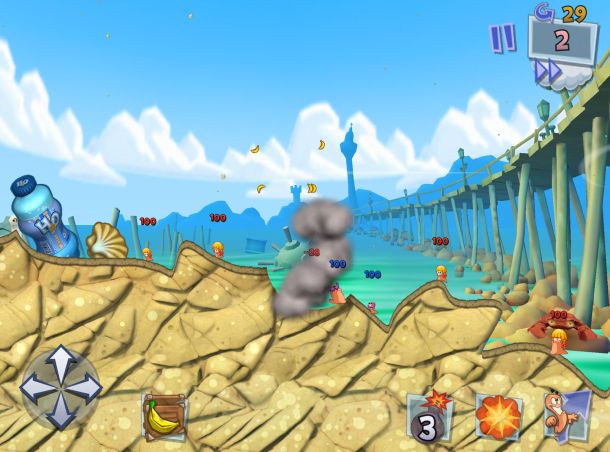 New to the series is a class system, letting you deck out your wormy soldiers as Soldiers, Scouts, Scientists, and Heavy Troopers, and an interesting optional trading card system, which will let you play cards to enhance your tactics at the beginning and end of each turn from a deck of 41 cards that you can purchase and customize yourself.

You’ll get 27 single player missions and four different environments, like Beach, Spooky, Farmyard, and Sewer. Here’s hoping the Worms don’t piss off the Teenage Mutant Ninja Turtles while they’re down there. There’ll also be a variety of crazy weaponry — a series staple — like a Black Hole Grenade, the Homing Pigeon, and Nora’s Virus to beat the tar out of your frenemies.

Worms 3 should support AirPlay as well, letting you zap the wacky worm warfare up to your large high definition television set should you want to.

We’re pretty excited about the news, even though Worms 3 isn’t releasing just yet.