Joe Danger is the most beautiful motorcycle stunt game that you’ll find in the App Store. Joe, the world’s most determined stuntman, first made his debut on the PlayStation Network in 2010, and now he’s back and better than ever.

Grab your motorcycle and defy death as you jump buses, dodge giant mousetraps, and leap over tanks filled with sharks to claim your title of Master of Disaster. Enjoy more than 20 hours of gameplay, with 25 characters to unlock, and Game Center integration.

Little Amazon is a new platform game from Bulkypix, the developers of The Sandbox and Another World, in which you help a young girl called Lily free the cursed lair of the horrible demon Grûûl.

You must run through the forest as fast as you can, destroying any creature that stands in your way, and collecting as many coins as you can. When you complete missions you’ll win trophies and gain new abilities that will help you along your quest.

Little Amazon offers iCloud game syncing, and you can play it on your HDTV in 720p if you have an Apple TV.

Featured in Apple’s “New & Noteworthy” section this week, Wake the Cat is a unique puzzle game in which each level requires you to wake a little kitten from her slumber. You’ll have to put together all kinds of strange contraptions in an effort to guide a ball of yarn around the room and hit the dozy cat. It sounds cruel, but it’s not.

There are 60 puzzles to solve initially, with more on the way in future updates. If you like puzzle games, then Wake the Cat will certainly keep you occupied this weekend.

Take My Machete is another awesome new game that won’t cost you a penny. It’s a classic arcade beat ’em up from one-man studio Upper Class Walrus. You play a man, armed with a machete, who must slice and dice his way through hordes of aliens as you search for the missing puzzles pieces in each level.

There’s a story mode with 4 stages and 4 bosses; you’ll play through this relatively quickly, but it’s lots of fun — and free! There’s plenty more fun to be had, however, in the endless mode, in which you fight off incoming aliens for as long as you possibly can. There are trophies to unlock, collectable pets, and more than 20 achievements. 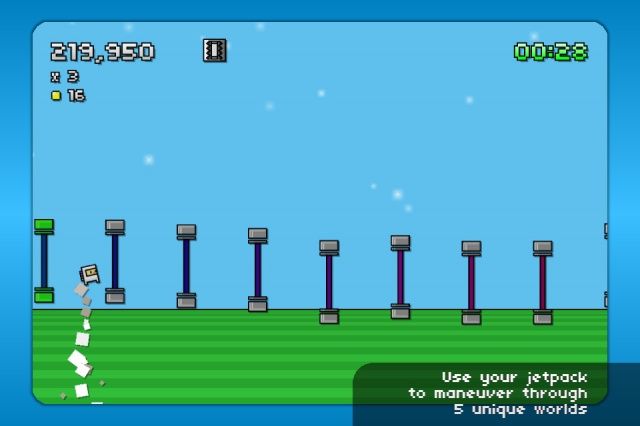 It might be the simplest, but Jtpck has been my favorite game this week. It’s almost like a retro 2D version of Jetpack Joyride, but at the same time, it’s quite different. The aim of the game is to get the highest score you can without dying. Each game begins with a 30-second timer, and you must use your jetpack to fly through gates and add two seconds to the clock. For each one you miss, however, five seconds is deducted.

There are more than 20 power-ups and “power-downs” that will come at you while you’re flying, each of which will drastically alter the way you play. You can unlock a dozen new characters, and there are more than 50 achievements to collect.