Sony says they’re getting ready to ship two drool-inducing new toys. The first is a new addition to its compact NEX series, the NEX-5R, equipped with wifi, an ultra-quick (according to Sony), hybrid phase-detection/contrast detection autofocus system and — here’s where it gets really interesting — the ability to download specialized apps.

The second is Sony’s entry into the exploding action-cam market; the aptly named Action Cam is a really tiny, 3-ounce (with battery) video camera that comes with a variety of outdoor-enthusiast mounting options and the ability to use a smartphone’s screen as a viewfinder.

Besides the new autofocus system (the first Sony NEX built with such an advanced system), the NEX-5R features a 16 MP CMOS sensor, a wifi radio for controlling the camera or uploading images wirelessly to a computer (again, a first in a Sony NEX) and programmable buttons.

But it’s the concept of downloadable apps that scores the biggest whoa factor. In trying to mimic the flexibility and fun of smartphone camera apps, Sony has created a suite of apps that bring custom elements — watercolor effects, on-camera photo retouching, multi-frame noise-reduction, aperture/focus bracketing or even the ability to control the camera from a smartphone — to the NEX-5R. The apps can even be downloaded to the camera over wifi when connected to a hotspot, just like on your iPhone or Galaxy S.

The Action Cam is a challenge to the likes of GoPro and Drift: It’s a tiny wearable 1080p video camera, with its own ruggedized, waterproof case, and comes in two flavors: a $270 version with wifi (HDR-AS15), and a $200 version without (HDR-AS15). We like the with version for its ability to wirelessly upload videos and stills to a smartphone or tablet, and because it can wirelessly harness a smartphone’s screen to frame shots. Sony will also make available a plethora of mounts: helmet, goggle, headband, suction-cup, etc.

The two Action Cam models should hit shelves in September, with the accessories available at ship date or dropping in shortly thereafter. The NEX-5R ships in October with a pricetag of $650; $100 more gets you the kit version with an included 18-55mm lens. 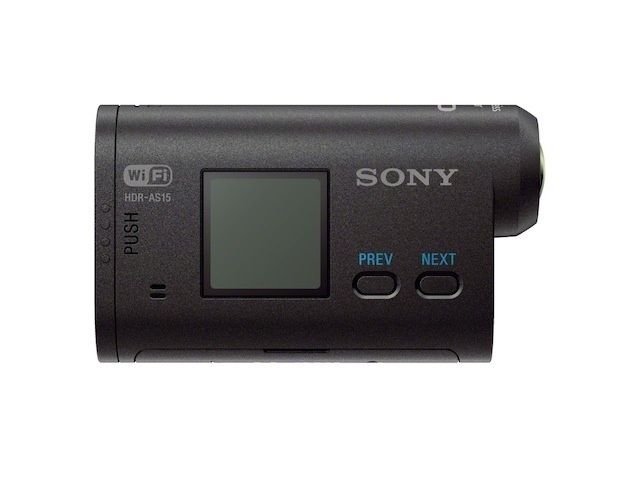