For those of us watching the trial of Apple vs Samsung this week, the fact that Judge Lucy Koh made the companies reveal confidential sales data is something of a no-brainer. The jury will need to look at the sales of the various devices from the two mobile technology giants to decide at some point what the damages should be, if any. 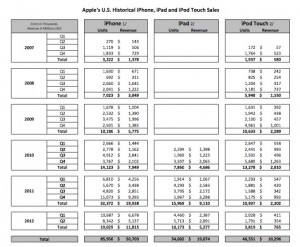 On a strictly numbers basis, of course, Apple is doing much better than Samsung in the smartphone game, though the length of time Cupertino has been in the game is longer. It will be up to the jury in the Northern Californian courtroom to interpret the data, of course, to see if there are financial damages or copyright/patent infringements.

It’s interesting, though, how much information has been brought to light, from companies, especially Apple, who value secrecy so highly. We’re pretty sure this isn’t what CEO Tim Cook meant when he promised to “double down” on new product secrecy.