Apple sent out an interesting message to third-party developers today. iOS devs are now required to submit Retina display screenshots for their iPhone and iPod touch apps to the App Store. All updates to existing apps must also meet the 960×640 resolution requirement.

Not only does this new policy signal the death of 480×320 resolution apps, but it also indicates that the iPhone 3GS may not be around much longer.

Since the introduction of the Retina display-equipped iPhone 4 and iPod touch in 2010, lower-resolution apps have simply scaled up on Apple’s fourth and fifth (iPhone 4S) generation devices. The result has been a semi-fragmented experience in the App Store. We all know how much Steve Jobs hated fragmentation, and there was nothing worse than downloading an app on your iPhone 4 that hadn’t been updated for the Retina Display. The screen looked pixelated and the whole experience was very un-Apple like.

Most of the apps that people actually use in the App Store have been updated for the Retina display over the last couple years, and then there’s the thousands upon thousands of worthless titles that haven’t hopped on the bandwagon. Now Apple is saying that it’s Retina display or the highway. 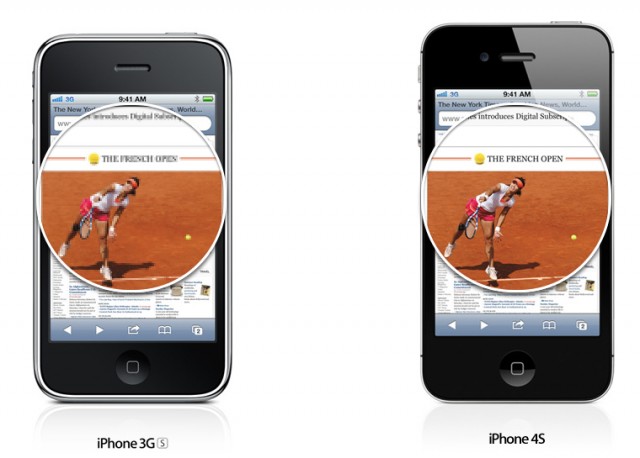 The iPhone 3GS came out in June of 2009. During the iPhone 4S announcement last October, Apple announced that it would begin offering the 3GS for free with a two-year carrier contract. That was a brilliant move that has helped Apple saturate itself into the low-end smartphone market. But it’s time to move on.

After nearly 3 years, Apple could finally be ready to put the 3GS to bed. There’s no reason to keep selling an outdated phone that can’t even display App Store apps in their full resolution.

Here’s what I see happening in 2012: The 3GS gets the boot. The iPhone 5 (technically the sixth-generation version) takes the 4S’s place as Apple’s flagship smartphone. The iPhone 4S gets put in the sub-$100 price range and the iPhone 4 takes the place of the 3GS. Considering that the iPhone 4 is still one of the best handsets on the market, and the fact that Apple is leading the pack in market share growth and profits, I see no reason why the iPhone 4 couldn’t be offered for free with a carrier contract this year. Apple would have its most impressive lineup ever: the upcoming iPhone 5, iPhone 4S, and iPhone 4.

Adios, 3GS. Don’t let you door hit you on your way out.