Having someone snoop into your private life is a horror that sends most Americans into a state of demonic rage. People went completely nuts over the Carrier IQ controversy,  and we wonder how most people would react if the internet had transparent access to all their text messages. Unfortunately, Apple’s iMessage has revealed what such a scenario might look like, and it’s not only not pretty… it’s something that can happen so easily that even an Apple Store Genius has had his private text message history exposed, sexting and all.

This afternoon Gizmodo revealed the story of an Apple Store Genius they call “Wiz” whose iMessages have been sent to them by accident over the last couple of weeks completely unbeknownst to the Apple Store Genius.  It’s freaky to think just how much personal information we pass along to our trusted friends, and how that information could potentially be used against us should it fall into the wrong hands. Gizmodo knows all about Wiz and his exploits with women, job status, photos, email address, and blood pressure thanks to the receipt of his iMessages on their iPhone.

They never tried to snoop on Wiz, but how did this Apple employees information accidentally fall into their unprying hands? Apparently after their friend took her son’s iPhone to the Apple store to get fixed, a long-standing bug with iMessage transferred Wiz’s iMessage account onto the son’s iPhone. Despite trying to reset the phone and reentering the proper contact information, the iPhone still receives all iMessages meant for Wiz.

The amount of information they’ve been able to pilfer from his messages is pretty vast. They know his home address, Facebook profile, personal information about his friends, where he exercises, which Apple store he works at, and have insights into his love life. Luckily for Wiz the Gizmodo team aren’t seeking to use this info to their advantage and Wiz’s utter destruction, but what if this happened to you? The last thing I want everyone to know that is that I cry myself to sleep at night listening to Madonna’s new album.

While this bug isn’t anything new, it is very surprising that little has been done on Apple’s part to fix it despite the fact that they are most certainly aware that it exists. So if anyone in Cupertino is listening we’re pleading that they get this issue resolved rather than fire Wiz for his attempts to kiss his co-worker’s calves. 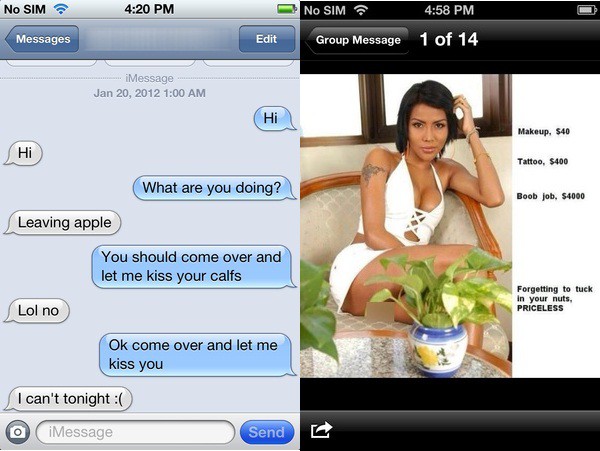