Master Adobe Illustrator with over 30 hours of training [Deals]
Today in Apple history: iPhone sales hit first speed bump
Music tips from guy who made Steve Jobs dance [Cult of Mac Magazine 333]
Today in Apple history: Sun Microsystems almost buys Apple
Save more than half off a new iPad mini 3 [Deals]
Add rad text captions to your Instagram photos without an app
Take a deeply discounted dive into iOS development [Deals]
Apple Arcade’s Butter Royale is a Fortnite-like food fight
These gorgeous cases wrap your AirPods Pro in luxury leather
Palm-size pillows will have you dreaming about that first Mac

ION Audio is showing off two new iCade products at CES in Las Vegas this week that provide retro gamers with physical controls while they’re on the go.

Unlike its original iCade Arcade Cabinet, which you wouldn’t dream of carrying around in your rucksack, the iCade Core and iCade Mobile accessories from ION are compact, lightweight, and ready to follow you about.

The iCade Core is similar to ThinkGeek’s original iCade cabinet — which was also developed by ION — only without the bulk. It does away with that hefty housing to provide a compact dock that features the same eight-button layout as the original cabinet. What’s more, the iCade Core will also accommodate your iPad in landscape view, and it’s compatible with the iPhone and iPod touch, too. ION hasn’t announced pricing for the Core yet, but does promise it’ll arrive during 2012.

iCade Mobile is exclusively for the iPhone and iPod touch, and it’s even more compact that the iCade Core. Designed to look and feel like a good old-fashioned gamepad, the Mobile features four shoulder buttons on its top edge, four buttons on its front, and a classic d-pad. It allows you to swivel your device while inside to provide gaming in both landscape and portrait views, and it’ll be available during the second quarter of this year for $80.

Although not officially announced by ION, Engadget also happened to spot the iCade Jr. at ION’s CES booth, which is just like the original iCade cabinet, only it’s for the iPhone. Engadget reports the unit they saw was not a working model, however, and there’s no word on pricing or availability just yet. 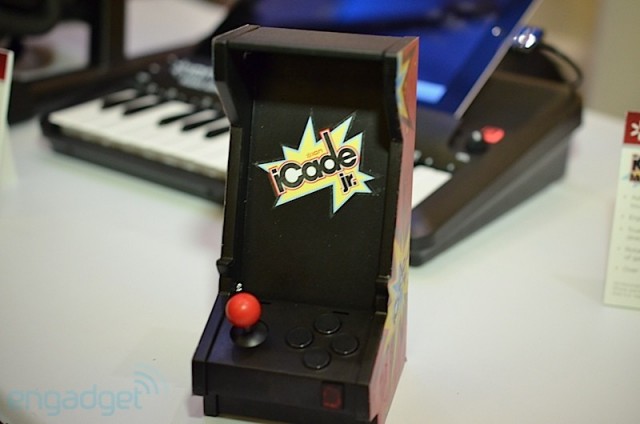 ION’s press releases for the iCade Core and the iCade Mobile are below.

iCade Core is a streamlined version of ION’s acclaimed iCade arcade cabinet that equips the iPad with authentic, arcade-style joystick and buttons that are ready for fierce non-stop gaming. iCade Core allows iPad users to challenge their friends, throw retro-gaming parties and achieve their highest scores yet. iCade Core offers an incredible arcade experience, bringing all the fun of classic arcade gaming to the iPad in a compact form factor.

iCade Core’s specially designed cradle ensures safe loading and unloading of a user’s iPad, while also providing a solid, secure fit for even the most intense gameplay sessions. Beneath the cradle is a custom-designed pass-thru slot, which allows users to charge the iPad with their standard 30-pin cable. The cradle also swivels to allow either portrait or landscape so that orientation is never a problem. iCade Core’s top-quality arcade controls quickly connect to the iPad using Bluetooth wireless technology. Once the iPad is in place, simply launch any compatible app and it’s game-on.

iCade Core is compatible with great classic games including PAC-MAN, Asteroids, Centipede, and Battlezone. Plus, it’s compatible with tons of modern games, over 200 games in all. Users can take control of iCade Core’s full-sized joystick and smash its eight arcade buttons for complete command of their favorite games. This truly unique game-controller provides hours of nonstop gaming action.

“iCade Core retains the action-packed excitement of real arcade-style control from the original iCade, while being incredibly easy to take just about anywhere,” said Fred Galpern, Brand Manager, ION Audio. “iCade Core is just about the most fun you can have with an iPad, iPhone or iPod touch.”

iCade Core is expected to arrive at www.ionaudio.com and other retailers in 2012.

Touch screens are great for some games, but when it comes to mastering intense combat, racing, or adventure games it helps to have more than a touch screen. Since gamers prefer tactile buttons, iCADE MOBILE is the perfect solution for serious gaming on-the-go.

Gamers of all ages will love iCADE MOBILE’s classic controller configuration, designed to play modern and retro games the way they were meant to be played. iCADE MOBILE’s four-way directional pad, four front-facing action buttons and four shoulder buttons are designed to withstand even the most fierce button mashing. iCADE MOBILE gets your fingers out of the way and gives you a full view of the action with a specially designed cradle that ensures safe loading and unloading of your iPhone or iPod touch, while also providing a solid, secure fit even during the most intense game-play sessions.

iCADE MOBILE will be available at ionaudio.com and other retailers in 2012 with a MSRP of $79.99.