That’s right, folks — that downtime earlier today wasn’t to introduce new products, but to update the online store instead. Apple has made purchasing the iPad 2 a much nicer experience, and seems to have tweaked things behind the scenes to make its online store a lot snappier.

When the online store came back up a short while ago, Apple’s changes weren’t apparent straight away… until we went to purchase an iPad 2. The online shopping experience for Apple’s popular tablets is now a lot prettier, and makes it easier to choose the right device for you. 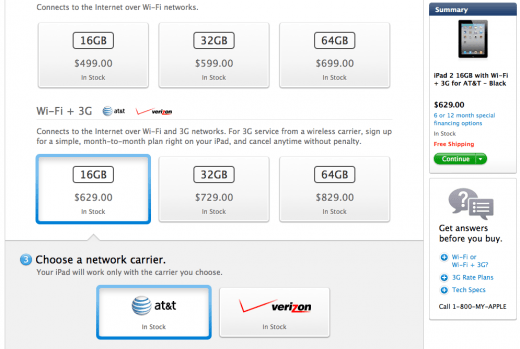 Firstly, you begin by selecting which color iPad 2 you’d like to purchase, and then you pick between the Wi-Fi-only or 3G-capable model. If you’re choosing the latter, you can also pick a carrier.

This compares to the previous layout which simply presented you with a mass of different iPad models and a designated selection button to purchase each one.

In addition to revamped iPad ordering, the Apple online store also seems to have been tweaked behind the scenes to make things much quicker. The Next Web believes all these changes may have something to do with Apple’s upcoming iPhones:

Apple may have improved the navigation of its ordering pages ahead of its new iPhone, simplifying the buying process should it confirm rumours and launch two new iPhone smartphones in the coming weeks. With Apple said to have been actively pursuing partnerships with a number of operators ahead of the launch of the iPhone 5, the new ordering system will reduce customer confusion and ensure they pick a device that is suited to them and available on the network of their choice.

The new layout is apparent on both the U.S. and U.K. online stores right now, but it’s expected to roll-out to other territories imminently.