Apple’s intentions to introduce a wireless system to its iOS devices has been well documented over the past few months, but just exactly how it plans to do it remains to be seen. However, a new patent application published by the U.S. Patent & Trademarks Office today could reveal all.

Discovered by Patently Apple, Apple’s latest patent describes a wireless charging method not too dissimilar to that of the TouchStone dock from HP. However, rather than a dock, Apple’s device is a tower (that kind of looks like something you’d put your paper towels on in the kitchen) which you wrap your device’s earphone cables around the tower to create a “receiving coil,” and then placing “a new conductive metal mesh earphone on the media device to begin the charging process.”

9to5 Mac explains how the system works:

Apple also describes another method which would require you to place your earphones into a small “acoustic charger,” kind of like a dock for your earphones, to charge the device attached to the other end. Inside the acoustic charger is a speaker that uses a non-audible frequency range to create a vibration. This causes a transducer within the speaker to generate a current in the earphone conductors. 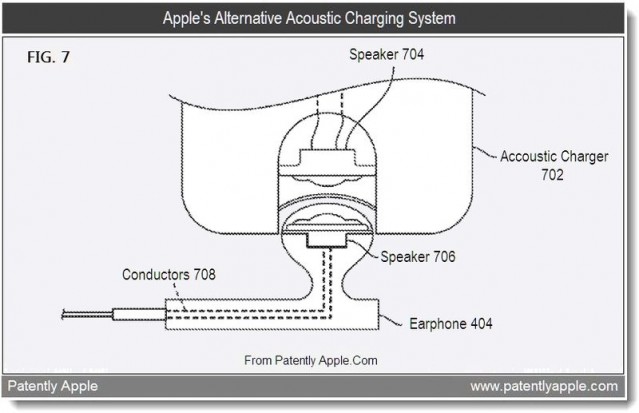 What do you think of this method for charging your iOS devices?