Apple has been using Liquid Contact Indicators(LCI) in practically all of their devices for as long as I can remember, but it looks like with the iPad 2 they’ve stopped using them.

This makes sense because these sensors have not been all that reliable and subject to a lot of false positives from something as mundane as sweat. In 2009 this was a big news topic that I covered for CNET and I spoke to local Channel 2 news in Houston, Texas about complaints they had received from iPhone users. Even CNN had something to say about it.

It was so easy to trip these sensors that there was even a lawsuit over it.

Apple’s hardline stance about the sensors was eventually relaxed making a trip to the Genius Bar at lot less dramatic now then it was in 2009. 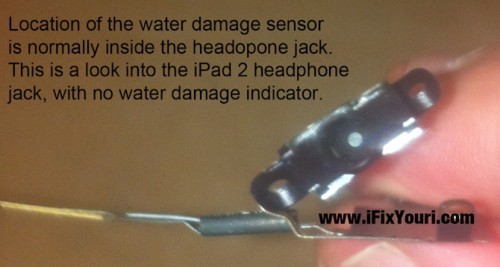 According to the Apple Genius DB water damage can be discovered using the following methods for the first and second generation iPads:

The iPad warranty excludes coverage for damage caused by liquid. To help determine if an iPad has been in contact with liquid, two liquid contact indicators (LCIs) are installed on the iPad at the following locations:

Use a lighted otoscope to look into the headphone jack and 30-pin connector slot for activated LCIs. They turn red on contact with liquid.

Besides your favorite iOS based devices like the iPhone, iPod touch, and first Generation iPad Apple also uses these sensors in portable and desktop computers and in iPods. The most recently release model of the MacBook Air has eight LCI s inside of it.

Of course there is no explanation available as to why Apple has dropped these from the iPad 2.

I’m glad they did and I hope they do the same with the iPhone 5. It can get mighty hot and humid down here in Southeast Texas in the summer.