Ever feel like Steve Jobs is messing with you just for fun? That’s what I thought when I opened up iTunes 10 and saw the minimize, maximize, & close buttons on the left hand side of the window, instead of aligned at the top.

Moving the buttons over there goes against everything OS X design is about. It’s an uncharacteristic move by Apple, unless they plan to move the buttons to the side for all of their applications, which doesn’t seem likely. Don’t worry though, there’s a super simple fix for this weird quirk if you want to bring uniformity back to OS X.

Second: Open Terminal (if you’re not familiar with it, it’s located under Applications > Utilities  > Terminal)

Third: Type or Paste the following into Terminal and then hit enter. “defaults write com.apple.iTunes full-window -1”

Fourth: Open iTunes, and notice that balance has been restored. 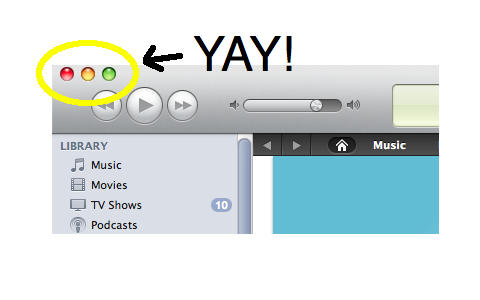 Update: Here’s a mod, courtesy of Obama Pacman on how to restore color to the icons in the left sidebar. I haven’t tried it because I like the unity of the new grey, but if you’re clamoring for some color give it a shot.