Clearing out your desk can be a great way of discovering paraphernalia you’d long since forgotten you owned. Things are no different if you’re a long-time Apple employee, packing up your office at 1 Infinite Loop to move to the amazing new Apple Park campus.

Here are a few of the pieces of Apple memorabilia that Chris Espinosa — Apple’s longest-serving employee, who joined the company  as a 14-year-old kid when it was still based in Jobs’ garage — found when he was clearing his desk recently. Check them out below.

One item in Espinosa’s office was an original Macintosh 128K. All of the original team members on the project received a Mac unit, complete with personalized team nameplate. Espinosa’s was number 63.

Before joining the Mac project, Espinosa studied at University of California, Berkeley, where his freshman advisor was graduate student Andy Hertzfeld, one of the Mac project’s lead software engineers.

…and speaking of the Mac

One of the pages from the Macintosh press release from 1984.

The IBM Personal Computer launched on August 12, 1981. In doing so, it ignited the long-running Apple-versus-PC rivalry. Secure in the Apple II’s technical superiority over the IBM PC, Apple welcomed IBM to the personal computing party in the pages of The Wall Street Journal.

The ad, now appearing distinctly yellowed with age, was still hanging in Espinosa’s office. As he gloats a little bit in his tweet, “We’re still making PCs, they’re not.”

His badge from the West Coast Computer Faire 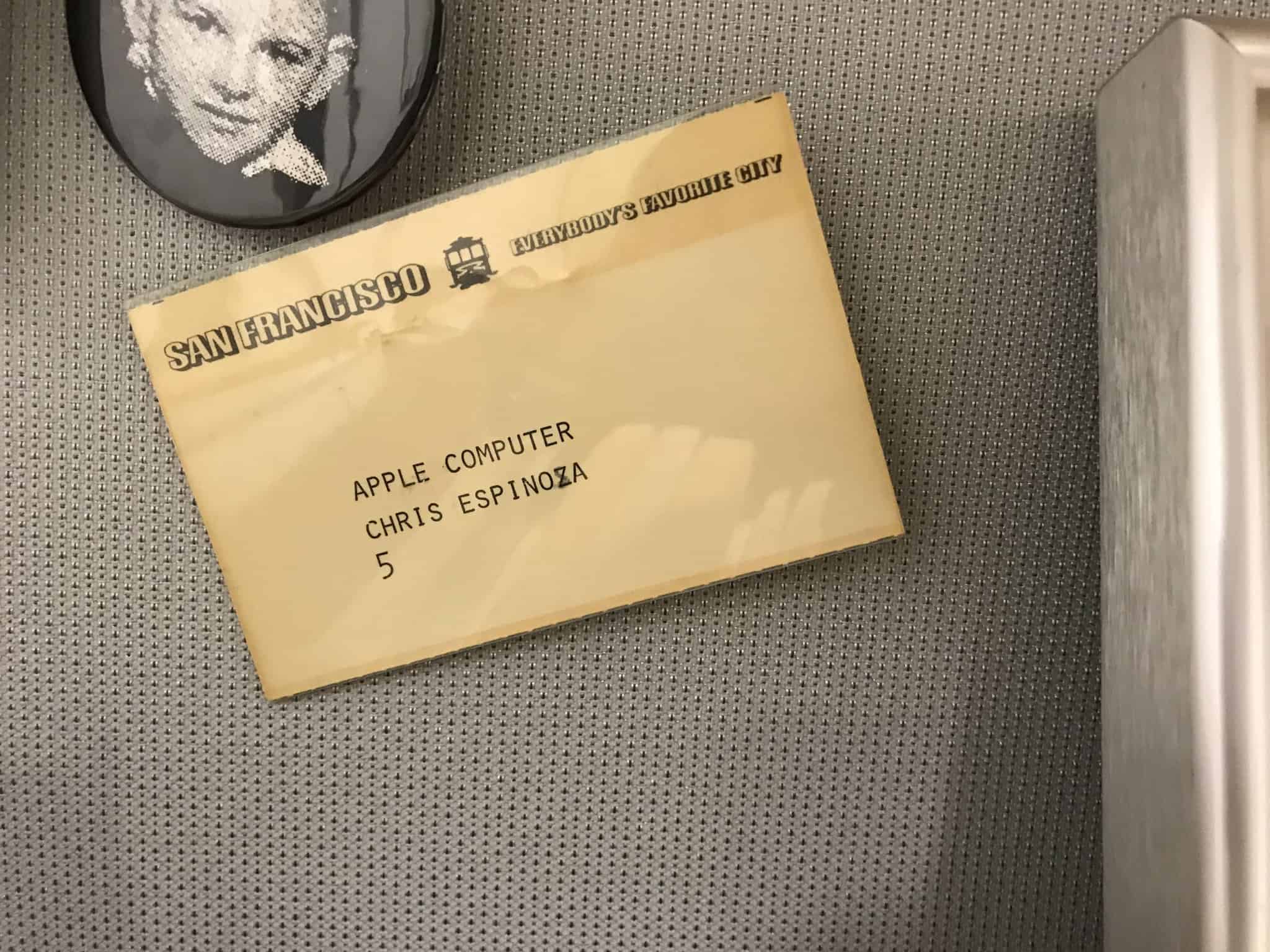 Kicking off on April 17, 1977, the West Coast Computer Faire was the first personal computer-focused convention to take place in the Bay Area. It took place at the Bill Graham Civic Auditorium in San Francisco, which Apple has since returned to for media events.

The West Coast Computer Faire is significant in Apple history because it was where Apple first unveiled the Apple II, the first mass market computer in company history. It’s also where Apple showed off its iconic logo, designed by Rob Janoff, for the first time. 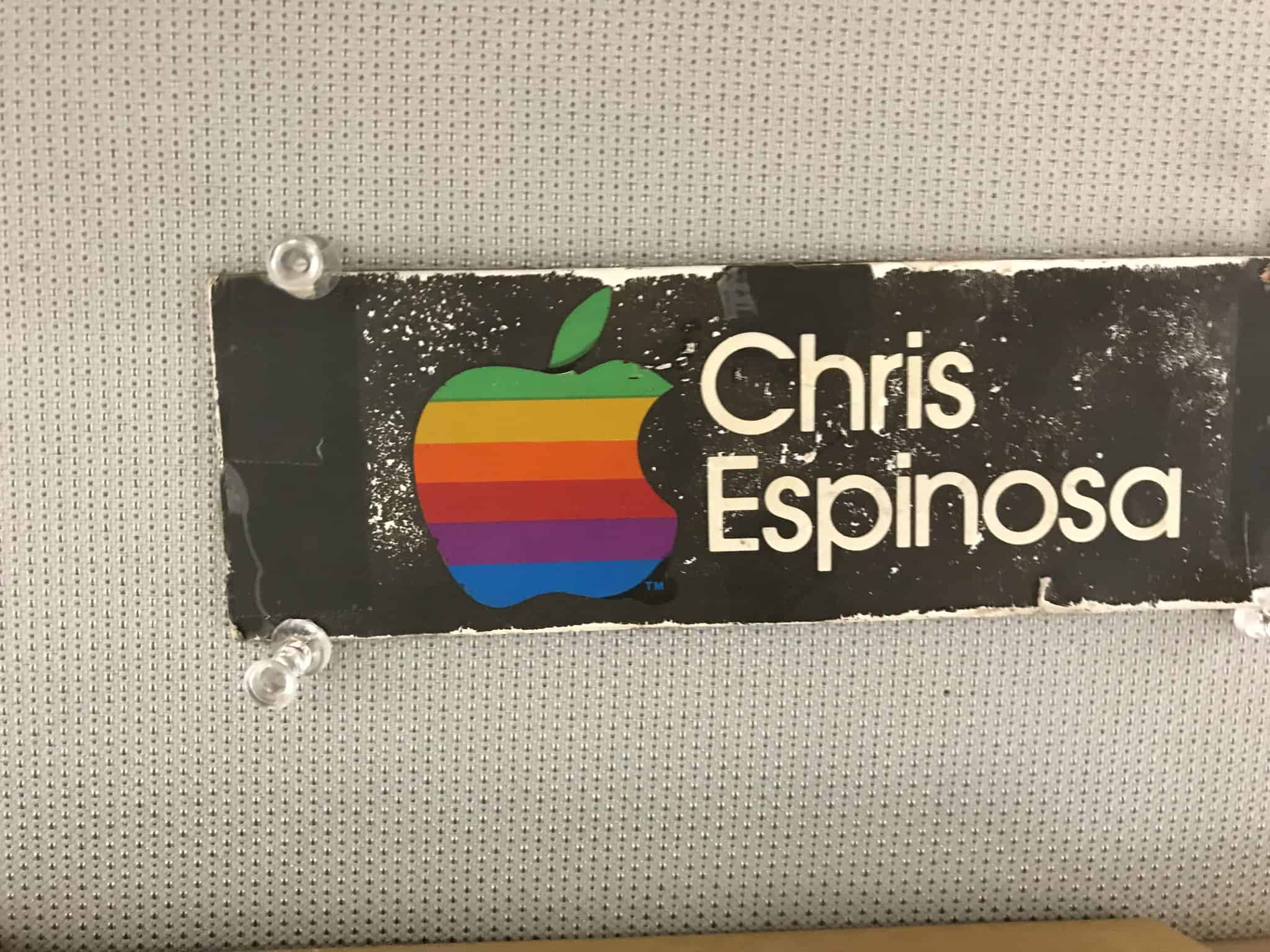 This cubicle name badge, set in Avant Garde, belonged to Espinosa back in 1980. On December 12 that year, Apple went public — floating 4.6 million shares on the stock market for at $22 per share.

It was the biggest tech IPO of its day, and made more than 40 out Apple’s 1,000 Apple employees instant millionaires. As Apple’s biggest shareholder, 25-year-old Steve Jobs ended the day with a net worth of $217 million.

The heart of the Apple-1

Both the Apple-1 and Apple II used the same MOS 6502 CPU, just as the Commodore and Atari personal computers, and early Atari and Nintendo games, did. It was the least expensive CPU available on the market at the time, and required fewer support chips to make it work — which helped reduce costs.

“Finally, the bumper sticker Gil Amelio distributed after our last big layoffs in 1996,” Espinosa writes. “He was, that time, correct. $AAPL bottomed out at $7 a share.” Not long after, Steve Jobs was once again at the helm and Apple began its climb back to the top.