Apple’s digital assistant is great at finding information for all sorts of things. But when it comes to hookers, Siri is the world’s worst pimp.

Thanks to a glitch with Siri, iPhone users in Toronto looking for prostitutes keep getting routed to an bar in Little Italy. There’s just one problem. The owner insists his bar is definitely not the place to find a call girl.

Alvin Acyapan, who co-owns the bar says he keeps receiving mysterious late night calls ever since his place opened in 2016. If you’re looking for a quick hookup, Acyapan’s bar is one of the worst places in town to do so because it’s an eSports bar that caters towards a more nerdy crowd.

“I thought people were getting the wrong number or maybe it was a prank by someone listing our phone number on some unscrupulous website,” said Acyapan in an interview with the Toronto Star. 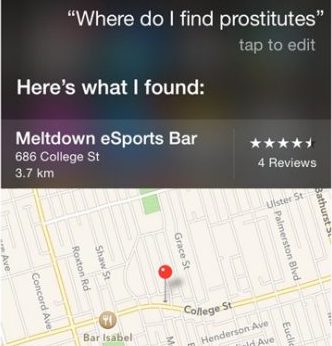 The bar’s owners didn’t know what was causing patrons to confuse their establishment with a whore house. Then one of the callers said Siri gave him the number.

All of the calls come straight to Acyapan’s personal cellphone which doubles as the main business line for the Meltdown eSports Bar. Late night callers would probably quickly become an annoyance for most people, by Acyapan thinks it’s actually pretty funny.

“I see the humour in it,” said Acyapan. “I always thought of it as a funny anecdote to share with my friends: ‘Hey, we run a bar and sometimes I get this kind of call.’”

Despite attempts to contact Apple tech support, Apple Maps still directs users to the bar. Anytime someone asks to find an escort, hooker, or prostitute, Siri still sends them straight to Meltdown.