If there was one thing heard across Twitter during today’s Apple announcements, it was the sound of money being sucked from wallets.

The introduction of an iPad 2, a more interactive Apple TV and the upgraded iPhone 6s generated tons of spending declarations on Twitter and in the posts written in another language, the exclamation point was a good indication of the social media excitement over Apple’s new products, rolled out today at the Bill Graham Auditorium in San Francisco.

Every Apple event generates tons of snark and awe by Apple fans – and trolls – chiming in on Twitter as they watch the event stream live.

There was the usual griping about time, especially when it was apparent Cook, Cue and company would surpass the two-hour mark on stage. There were also the familiar stat nerds counting the number of untucked shirts, times the word innovation was used and the number of women speakers (a record number Wednesday).

But there was also a giddy urgency to spend money.

Apple fans on Twitter seemed most excited over the new iPad Pro, but were also quick to point out how, with the optional keyboard case, looked like the Microsoft Surface. 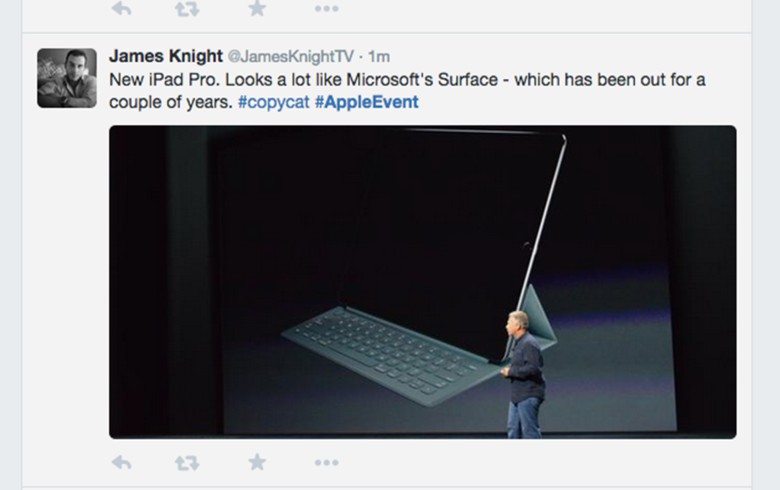 Fans seemed to be unimpressed and even incredulous about the $99 Apple Pencil, which some called an insult to the late Steve Jobs, who famously said he did not want to ever see a stylus with an Apple product. 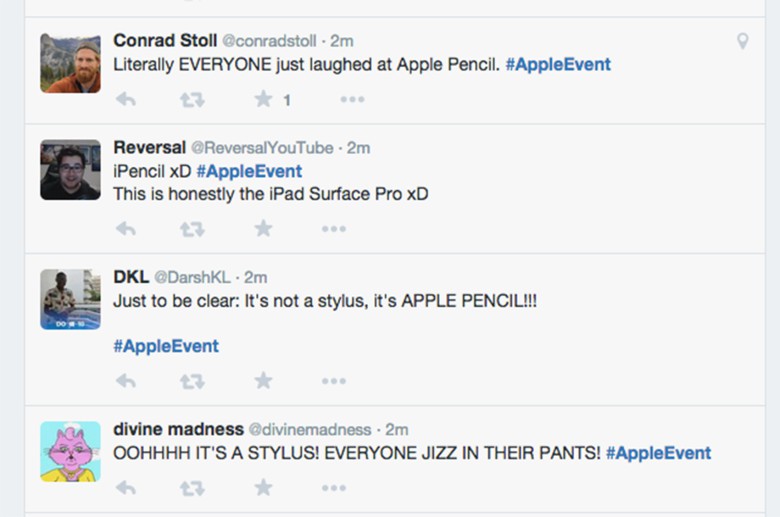 Those complaining about the time were impatient for news about the much anticipated iPhone 6s, which Apple saved for the end of Wednesday’s event. Many were impressed with the upgrades to the camera and 3D touch, but some said they were content with their now-old iPhone 6 and would wait for a 7.

Of course, the hashtag drew plenty of Apple believers who find no fault in anything the company does, and willing express their love and excitement from top to bottom.