Europe was supplanted by China this past quarter as the second most important market for Apple, but according to a new report from Kantar, the iPhone-maker is gaining grown in Europe thanks to Android switchers.

Over 30% of Apple’s new customers in Europe last quarter switched over from Android. All the new converts have pushed iOS’ marketshare in Europes five largest countries to 20.3%, marking a 1.8% increase from 2014.

Check out the graph below: 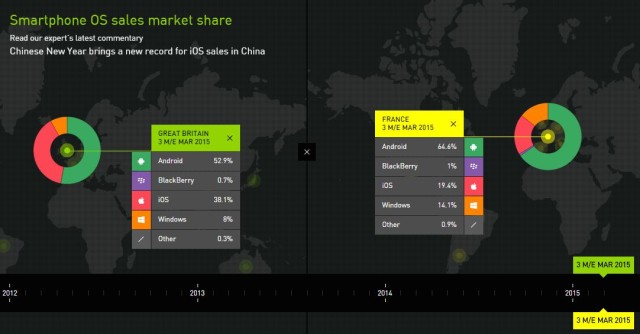 Android’s marketshare across Europe has declined 3.1% over the last year, but it still commands a large majority of the market with 68.4%.

Things are going even better for Apple in urban China, where Apple’s share rose to 26.1%, up from 17.9% last year. Thanks to China’s rising middle class, the country is now driving more volume for Apple than the U.S. where Android boasts a 58.1% marketshare.

Despite the already strong initials sales of the iPhone 6 and 6 Plus, Kantar’s chief of research, Carolina Milanesi, says Apple Watch could provide a nice boost in iPhone sales too.

“Apple’s iPhone 6 and 6 Plus already represent 18% of all iPhones in use in the U.S., and 64% of the iPhone installed base is an iPhone 5 or newer — good news for the Apple Watch that interacts only with these newer models.”

Number of comments on this postLeave a comment
Posted in: News Tagged: Android, Europe, iPhone