What would it look like if Apple let you work in multiple apps side by side on the iPad? Apple’s competitors like to poke fun at the iPad’s lack of desktop-class multitasking. But plenty of people are using the iPad to get work done, which begs the age-old question: is less really more?

Imagine OS X’s Mission Control ported to the iPad, and you’ve got the jailbreak tweak OS Experience. It’s an ambitious idea that is executed with surprising finesse.

After installing OS Experience from Cydia, your jailbroken iPad will take you on a visual tour of the tweak with some helpful tips. You can have up to five desktops that can be managed much like they are in OS X. Apps can be “snapped” to a side of the screen to allow a scenario like the Twitter and Safari apps running next to each other.

Everything about OS Experience is gesture-driven, including reordering and dragging apps in and out of desktops. Most of the gestures are pretty intuitive to pick up. 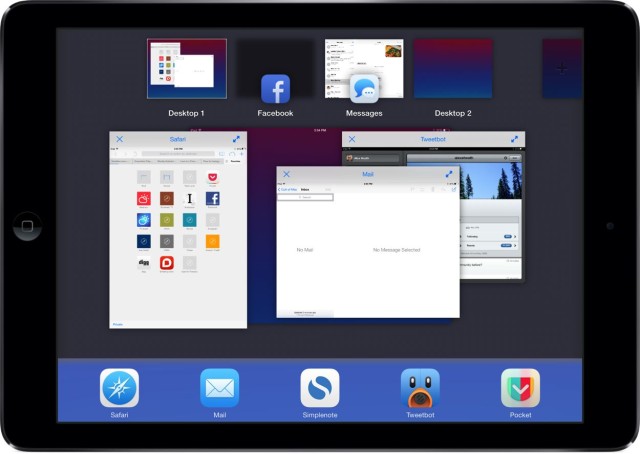 The biggest one I had trouble understanding was that you swipe down with four fingers to reveal an app’s window bar. From there, it’s possible to go fullscreen, snap a free-floating app to the side of the screen, or adjust the window’s size.

When an app is open and not fullscreen, swiping up with four fingers brings up the Mission Control interface that has been replicated so well. A four-finger pinch of the screen at any time reveals your home screen, which now has a blurred background and is treated more like Launchpad in OS X.

It’s obvious that Apple’s hardware has gotten powerful enough to make this level of multitasking possible. On the iPad Air, I noticed zero lag or glitches while using multiple apps at once. Live previews of every app currently opened can be seen when looking at all of your open desktops, which speaks to the performance capabilities of the A7 chip.

During my years covering the jailbreak scene, I’ve discovered that there are three kinds of tweaks. There are the ones that fix little annoyances for those with OCD tendencies, and the tweaks that do cool stuff but have very little appeal to most people.

The last kind is my favorite type to cover: the really forward-thinking ideas that even get copied by Apple sometimes. OS Experience falls somewhere between the second and third type.

It’s rare that you see a jailbreak tweak with this level of thought and polish. Most people will probably feel weird using it at first because of how different it makes basic navigation, but that doesn’t mean it’s not worth trying yourself. $9.99 in Cydia.