Unless you’ve been living under a rock, you can’t have failed to notice that iTunes 8 arrived to some fanfare earlier this week. I’ve been putting it through its paces, figuring out whether the new features are any good, and scoring them using our patented* rockometer.

More after the break…

Despite some people getting in a twist about Cover Flow’s disappearance from iTunes, it’s still there, so calm down, everyone. Instead, it’s Album View that’s been ousted, replaced by Grid View. Grid View aims to work like iPhoto, enabling you to group thumbnails by artist and ‘scrub’ across them, and then double-click to access a specific album.

Overall, this works quite well, and if you have loads of albums per artist, a slider provides more, er, scrubbing room, for all you ardent scrubbers. Grid View does, however, rather brazenly highlight how many of your albums are rather lacking in the artwork department.

Note: for people planning an assault on Cupertino due to Apple removing Album View, List View now has a wee widget that toggles an Artwork column, and this works pretty much like Album View, albeit without the nasty reflections. Result! 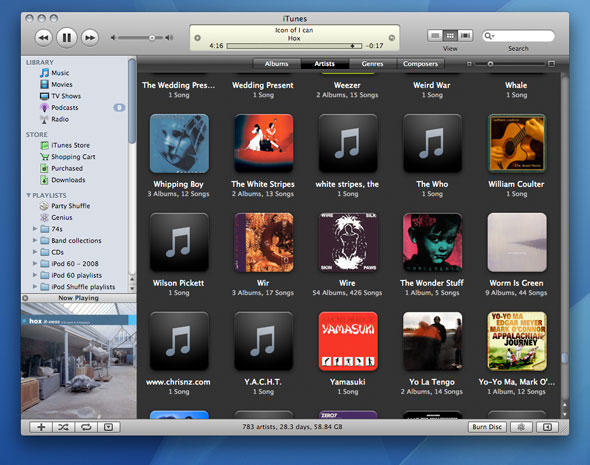 The old and tired visualizer has been relegated to the position of iTunes Classic Visualizer and a newcomer has taken its place. It’s hard to describe, but is rather reminiscent of luminescent sperms flocking around semi-transparent planets and suns, with colored smog from a rampant mentalist smoke machine occasionally engulfing the scene.

Oddly hypnotising, the new visualizer is also headache inducing, almost akin to a Lovecraftian epileptic fit or a space-age migraine. 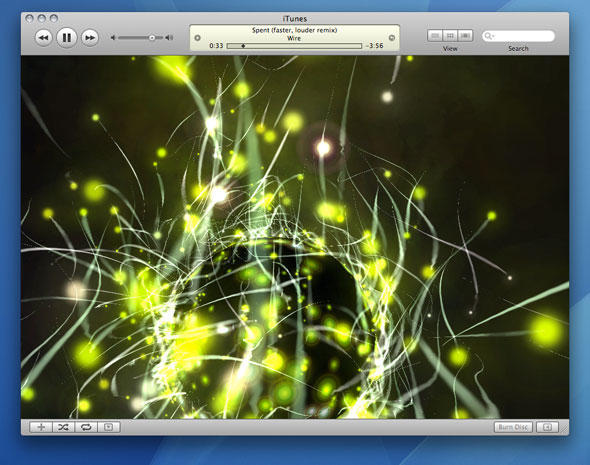 We’ve split the new Genius element in iTunes into its two component parts. First: playlists. Select a track in your Library, hit the ‘Start Genius’ button and watch as iTunes belches out a 25-, 50-, 75- or 100-track playlist based on your choice, which can subsequently be saved.

The good: if you’ve a large library, it regularly dredges up stuff you may not have listened to in a while. The bad: some of the choices it makes are rubbish, and you can’t select multiple tracks to base a playlist on. Expect this feature to expand in upcoming releases of iTunes. 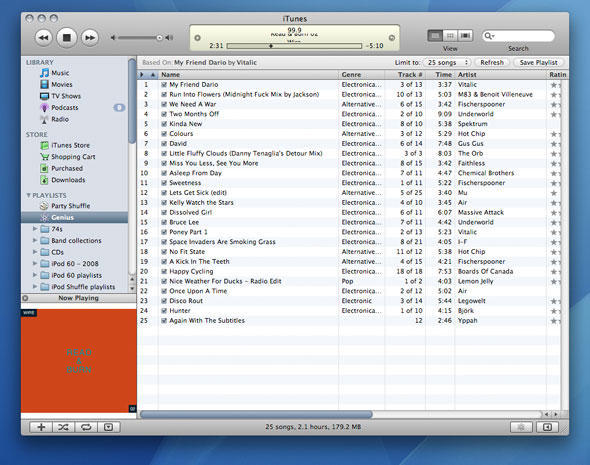 Commercial-me-do! This is one of those features that makes me grumble. Basically, select a track in your library and Genius Sidebar happily offers up albums, ‘missing’ songs and recommendations. Unfortunately, it’s not intelligent enough to spot slightly different meta info to what the iTunes Store uses, and so often offers tracks you already have. Also, the recommendations vary wildly, and it’s not so great if your music taste is eclectic. Expect to see the ‘Genius sidebar could not find matches for your specific selection, but here are the Top Songs and Albums in the iTunes Store‘ message enough times to make you hurl your Mac out of the window.

Personally, I don’t really get this feature. I’m sure some people out there find it useful, but I just saw it as a whacking great tumor-like ad on the side of iTunes. I don’t have Safari ‘recommending’ stuff to me as I surf the web, and so I’m not interested in iTunes doing the same while I listen to music. 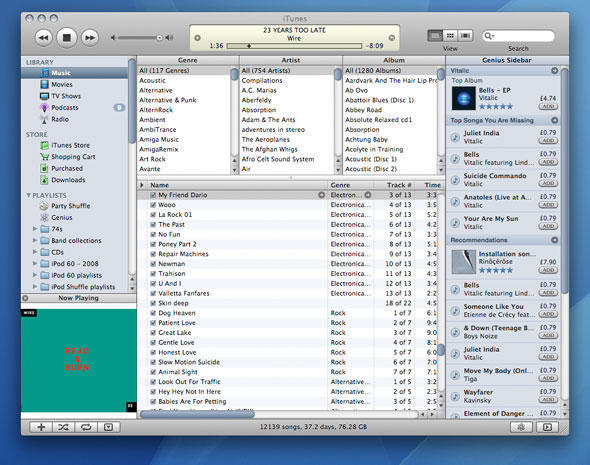 This is a no-brainer update. The additions are mostly useful and can be turned off if you hate them, and the application feels a little more coherent (not least the tidied-up preferences)—at least if you ignore the abhorrent UI decisions Apple continues to make in iTunes (get ready to welcome yet another scrollbar type when using Grid View).

Whether the changes warrant this being dubbed iTunes 8 rather than iTunes 7.8 is up for debate, but, hey, this is free software! What do you want? Blood? From biting the head off a bat? While a supergroup made up of Def Leppard, Led Zeppelin, AC/DC, Aerosmith and a strangely lost Mariah Carey do the biggest guitar solo ever?