Apple has regained its lead over Android in the battle for U.S. smartphone marketshare, according to the latest report from Consumer Intelligence Research Partners (CIRP).

Going by CIRP’s figures, in the final quarter of 2013 iOS eked out a 2 percent advantage over Android — with Apple capturing 48 percent of the market to Google’s 46 percent.

Breaking that figure down further, Apple outsold Samsung by 48 percent to 31 percent.

While market share isn’t everything (although it’s worth noting that Apple also has the most valuable customers in terms of spending), these findings still mark a considerable turnaround for Apple.

In the previous quarter — prior to Apple launching its new iPhone 5s and 5c models — the iPhone accounted for just 34 percent of the U.S. market, behind Samsung with 38 percent.

Here’s how Apple stacked up against the rest of its other marketplace rivals. If you ever needed a reminder that the smartphone platform market is a two-horse race between Android and iOS (and Samsung and Apple) this is it: 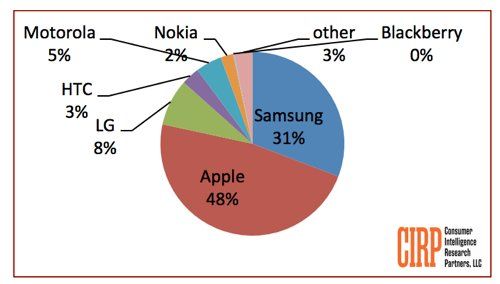