iOS 7 adoption is currently stealing 1 percentage point away from iOS 6 every week.

That’s according to Apple who have just updated their iOS adoption figures, presenting the data on its developers’ support page. Apple first reported iOS 7 numbers based on App Store usage on December 1, when 74 percent of users were on iOS 7, compared to 22 percent on iOS 6, and 4 percent on earlier versions.

That number currently stands at 78 percent — with iOS 6 falling to just 18 percent. The figure was taken from data measured by the App Store during a 7‑day period, ending December 29, 2013.

This is obviously great news for Apple, who have made a concerted effort to enure iOS 7 adoption since its September launch: even stipulating that all app submissions must be optimized for the OS by February 1, 2014.

It also demonstrates a massive contrast to Google — whose latest Android version KitKat is running on around 1.1 percent of all devices. 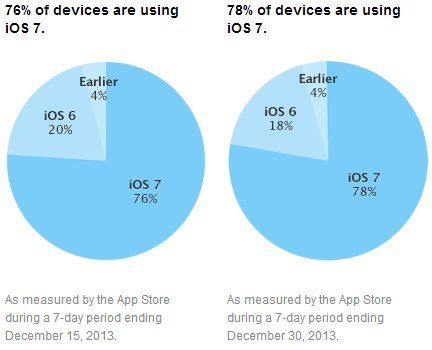