Hidden object games don’t usually catch my fancy, to be honest. I’ve never been a big fan of the mechanics, which typically require you to find objects to then reveal other objects, which can then be combined to become actual useful objects. I’ve also never been too taken by the typical romanticized story lines, either.

Big Fish’s new game, developed by India-based IronCode Games, Pahelika Secret Legends has found a way to convince me otherwise,t hough, and I find myself being drawn back to playing it often. There’s a fairly interesting story, and the puzzles are tough enough to provide a challenge without busting a brain.

If you’re like me and have been ambivalent about trying a game like this out, perhaps this is the one to start with.

Set in an alternate universe where science and magic co-exist, Pahelika: Secret Legends tells the story of Sudesh Budkoti, a normal guy who finds a strange chest in his house. Opening it sends him on a fantastic adventure through magical portals, which connect the player through each of the six challenge chapters in the game.

The killer feature here, though, is the hint and skip system. I typically get stuck on a puzzle in these kinds of games, and–no matter how long I wait–can never seem to get the solution. Pahelika: Secret Legends has a cure for this: a regenerating hint button that can be used as often as I like, provided I’m willing to wait the little bit of time for the button to become active again. While I wait, I tend to click around randomly on the screen, and have even solved tricky puzzles while I’m waiting for the next hint.

Even better, if there’s a puzzle I don’t want to solve, like those annoying number code locks, I can simply Skip them as often as I like, though I do have to wait for the Skip button to activate. It’s a great way to let me keep playing, stay engaged in the story, and feel less frustrated. If I’m less frustrated, I’m generally willing to keep playing. 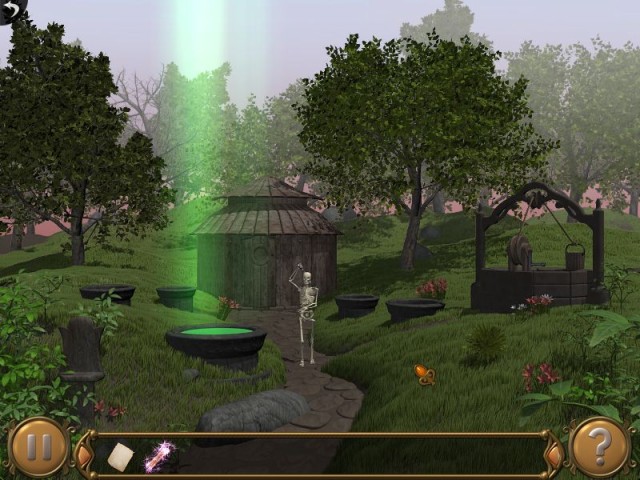 The puzzles range from those requiring objects to be found to combine with other objects to actual riddles and multiple choice questions that reveal the world view of this particular universe. There’s a great variety of puzzles, with compasses to synchronize, magic spells to be cast on bowls of liquids, and tile puzzles to unlock hidden areas. Nothing is ever too confusing, but I always feel just a bit more smart when I successfully navigate a particular screen of puzzles.

Pahelika: Secret Legends is a lovely way to pass some time when looking for a casual, gentle gaming experience. The artwork and music adds to the fun without becoming too overwrought, and the created world is just strange enough to encourage interest.