Brianna and Frank Wu didn’t set out to make a statement.

They just ended up creating a full-on spy-meets-spice-girls mobile game with the most distinctive look you’ve ever seen, and all the roles that matter are filled with women.

“I love the idea of powerful girls who are blowing stuff up,” says Frank Wu, “flying spaceships, diffusing bombs, and doing all the stuff that you associate with space marines, but it’s kind of irrelevant to the story that they’re girls.”

Irrelevant to the storyline, maybe, but in an entertainment media that is short on strong, normative female lead characters, upcoming iPad game Revolution 60 is a breath of fresh air. 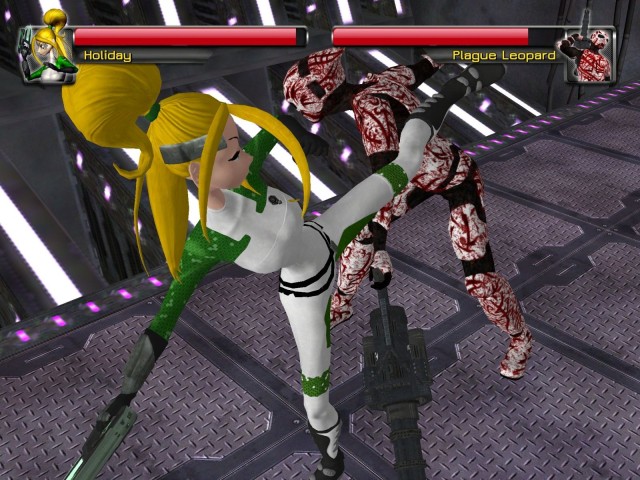 One of the complaints in the male-dominated gaming industry is that there aren’t enough female characters. Many (typically male) developers have said that including female characters would cost the teams a lot more. Most of us critics dismissed that idea. In our phone conversation, Brianna Wu, CEO and lead designer at Giant Spacekat Studios, confirms that adding new gender models does, in fact, add a significant cost.

“The choice to have all female cast was a cost saving measure,” the one time politico turned developer says. “Once the (female) model was created and brought into Unreal, to bring in a second, ‘male’ would cost another $10,000.”

That’s all well and good, but is Revolution 60 a great game? From the pre-release code we’ve been playing, it’s pretty great. The art style is bright, colorful, and super sci-fi looking. That’s because Frank Wu is a four-time Hugo award-winning artist with a ton of book covers to his name. His distinctive style is all over this one.

“I’ve spent my whole life drawing spaceships, he says, “and so to be able to bring Brianna’s girl art with my spaceship art is just fantastic. I got to design a space station with rings rotating around – it was kind of awesome.”

“We designed every single area in its own style,” adds Brianna. “It doesn’t look as “pretty” as, say, Deus Ex, but you get a sense of location and environment.”

Maybe not as hyper-realistic as the current style in console gaming, Revolution 60 is still amazingly pretty. Check out the video below to get a good idea of just how gorgeous.

Written by Brianna Wo and lead animator, Amanda Warner, the story in Revolution 60 is inspired by shows like 24 and Homeland. “The reason 24Revolution 60 is still in development, but you can see the fine work in the video above and the screenshots below. Be sure to keep an eye on this game and the Giant Spacekat team in general, as they take on the gaming industry and–just like the characters in the game–probably win.