The big screen biopic Jobs opened this summer to mixed reviews, primarily over the film’s lack of accuracy in depicting events from Steve Jobs life and Apple’s history. It’s not the first movie out about Jobs and it definitely won’t be the last as filmmakers strive to tell a celluloid version of the life of the mercurial Apple co-founder.

A lot of Apple old-timers have commented on the accuracy of the movie, but it took a Mountain View, CA local-access TV show called John Wants Answers to get Steve Wozniak, Daniel Kottke and Andy Hertzfeld together to dish fact from fiction. Host John Vink has a long history with the Cupertino company; he was an engineer at Apple from 1996 to 2012 and currently heads Macintosh desktop engineering for Nest Labs.

The two-hour discussion went through the film scene by scene, peppered with entertaining banter and some surprising recollections from the panel. Dan Kottke, who also worked as a script consultant on the movie, noted that “in making that film, it was a huge choice of where to start it and where to end it…I thought the movie did a pretty good job of getting the emotional notes right.”

Read on to know more about why no one ever got fired over kerning, had to ask what a Macintosh was and why you should watch TV movie Pirates of Silicon Valley.

The general consensus was that events, dates, facts and fiction were occasionally conflated to tell a better story. Many scenes were partially correct, but key details were altered. Some events portrayed were complete fiction, and the chronology wasn’t always right.

One example is the story of the Apple I and the Homebrew Computer Club. In Jobs the film, a young Steve Jobs stumbles across Wozniak’s new creation – a computer with a keyboard and screen – and becomes mesmerized staring into the TV monitor. He then sells the idea of a computing revolution to a reluctant Woz and convinces his shy companion to bring his system to the Homebrew Computer Club.

Woz spoke at length about what really happened:

“Steve and I both had gone over to a friend’s house, Captain Crunch, John Draper of the old blue box phone phreaking fame,” recalled Wozniak. “He sat down at a terminal, a teletype, and he started typing. Then he began playing chess with a computer in Boston.” Woz and Jobs were dumbfounded.

“Whoa!” said Woz. I thought: “this is just like Pong. I have to have this ability.”

Woz got some chips, an expensive keyboard ($60 – uppercase only) and wired the thing into his TV set. “This was not a computer, this was a terminal,” said Woz, “But it was a very short step before that terminal just got a little addition that made it a computer.”

Soon Woz made those additions and while Jobs was off at college, he started going to the HomeBrew computer club. Every two weeks, Wozniak hauled his TV set in the car, set up everything on a table in the lobby and started programming in earnest. Soon crowds began gathering and he started showing off his creation.

The buzz was growing, so Woz recalled that during one time Jobs was back home, “I pulled him to the club and showed him all the people around me. And he got the idea that we could sell them. I would have given them away for free.” The HomeBrew computer club already was full of people who wanted to change the world and Woz wanted to help.

“This is the complete opposite of the movie,” interjected show host John Vink. “In the movie we had Steve Jobs trying to convince you [Woz] to come to HomeBrew and you said ‘Nah, I don’t wanna go.'”

“Oh no,” replied Wozniak, “I’d been there since day one.”

The development of Lisa and Macintosh were seminal events for the future of Apple. The group concurred that the scene where the Lisa team was chewed out for not having multiple fonts in the word processor was complete fiction. Nobody was fired for a lack of typefaces or kerning, but they did note that a different engineer at Apple was fired around that same time for not wanting to undertake the effort to build a mouse for the system. 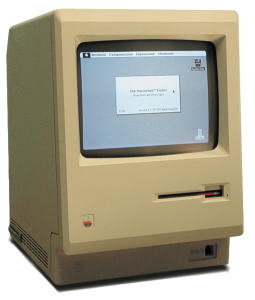 Many of the celluloid scenes did portray parts of events accurately, with dramatic effect added for flair. One clip included in the trailer portrays Jobs drafting a young Andy Hertzfeld for the Macintosh team. When Hertzfeld asks for more time to continue working on his Apple II project, Jobs yanks the computer off his desk and says “you’re working on the Macintosh team now.” Then a quick cut to Apple employee Bill Fernandez, who asks “What’s a Macintosh?”

Via email I asked the panel if that was how things really happened, or just good theater?

All three agreed that the Mac project was not a secret around Apple engineers and management at that time.

Nobody would ever have asked “What’s a Macintosh?” That line was just tossed in for dramatic effect, and Fernandez was actually working in Japan at that time. But Hertzfeld did confirm that he lost his computer in the transition.

“[Jobs] came by my desk and said “you’re working on the Mac now’,” said Hertzfeld. “I had just started this new OS for the Apple II, DOS 4.0… and I wanted to get it in good enough shape that someone else could take it over. Steve said ‘Are you kidding? The Apple II’s obsolete, the Apple II’s gonna be dead, you gotta work on the Mac!”

Hertzfeld pleaded for more time, but ultimately to no avail. “Then he unplugged my computer and carried it away. So I had no choice but to go after him!”

Some of the most animated discussion centered around Jobs departure from Apple in 1985 and the initial failure of the Macintosh project. They felt the movie didn’t accurately portray why Jobs was removed from the Mac team.

Woz: “The real situation was that the Mac failed terribly. Totally. We built a factory to build 50,000 of them and we were selling 500 a month. Steve had cancelled projects because they could only sell 2,000 a month.”

“I think he was taking it real hard that he’d failed for a third computer he’d tried to create and his vision really didn’t understand you have to build a market, it takes time, you aren’t going to sell 50,000 on day one. And meanwhile, we had to save the company.”

Jobs wanted to cancel or hamstring the Apple II in favor of the Macintosh, but it was important to continue selling and marketing the older system for a few more years. It generated most of the revenue. That was the primary business decision.

Hertzfeld chimed in: “I tell that story a little bit differently. The Mac did sell a lot of units initially, because of its novelty, because of its positive qualities. In June of 1984 it sold over 60,000 units. So they upped the forecast because Christmas was the big time and they thought they’d sell 80,000 units.”

But sales fell off steeply after the back-to-school rush in early fall, and by the end of the year sales were down to about 1,000 a month.

“When the Macs weren’t selling, a major mistake they made was trying to focus it on the office market,” recalled Hertzfeld. This was the time of the Lemmings commercial, a disastrous followup to the wildly successful 1984 spot. “The whole Macintosh Office thing never really got developed. The Mac needed a hard disk, that was really the biggest single design mistake that we made.”

Kottke: “And meanwhile Lisa had a hard drive.”

Steve Jobs and Apple clearly learned that lesson in the post-NeXT period.

Woz: “The Lisa was the right machine, with the right amount of RAM, but it was the wrong year for pricing. We finally got the Lisa back when we got OS X, actually, that’s what I like to say.”

The panel generally thought the that TV movie Pirates of Silicon Valley was a better portrayal of events of this period. Regarding Jobs, “there was no sense of suspense about this movie” said Wozniak. It didn’t show Steve’s thought process, how he reasoned and argued with people.

Hertzfeld noted that both movies had good acting, but Pirates had the better script. He felt that Jobs often felt like a laundry list of incidents instead of something which would show a deeper meaning.

Kottke said the producers of the film faced many decisions about what to put in and what to leave out, such as details about Pixar and NeXT. He said the filmmakers had tried very hard to get things right.

But one of Kottke’s most surprising memories might have been a quick quip to Woz: “Did you not love the Apple III? Because we all thought it was great!”