The iPhone 5s was hard to find this weekend but Apple certainly had no problem with the supply of the iPhone 5c. Early estimates showed the iPhone 5s outselling the 5c by a considerable margin on launch weekend and it’s still outselling its cheaper sibling nearly 3 to 1 a week later according to the newest data from Localytics.

During launch weekend the iPhone 5s was outselling the iPhone 5c by a 3.4 to 1 margin, but that gap dropped slightly the last four days to 2.9 to 1.  The study also looked at the distribution of iPhone 5s and 5c in a number of cities. San Franciscans preferred the 5s over the 5c the most (85% vs 15%) while people in Philadelphia seemed to care for the 5s over the 5c the least (72% vs 28%).

With over 9 million units sold the iPhone 5s and 5c now represent 2.0% of all active iPhones in the U.S. Based on traffic data from the 20 million unique iPhones on the Localytics network, it appears that AT&T activated the most iPhones during the first full week of sales, with Verizon taking second, and Sprint and T-Mobile bringing up the rear in that order. 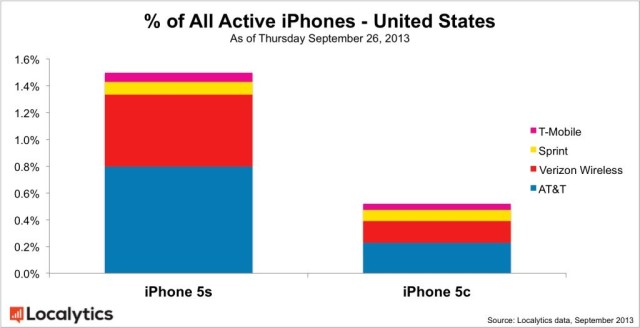