As we near the end of 2012, Cult of Mac has taken a look back at some of the best iOS apps that have hit the App Store over the last 12 months. There have been some terrific releases this year, and we could have named a hundred that are well worth your hard-earned cash. But we’ve managed to whittle our list down to just ten titles that have really stood out for us this year. Check out our best apps roundup below. 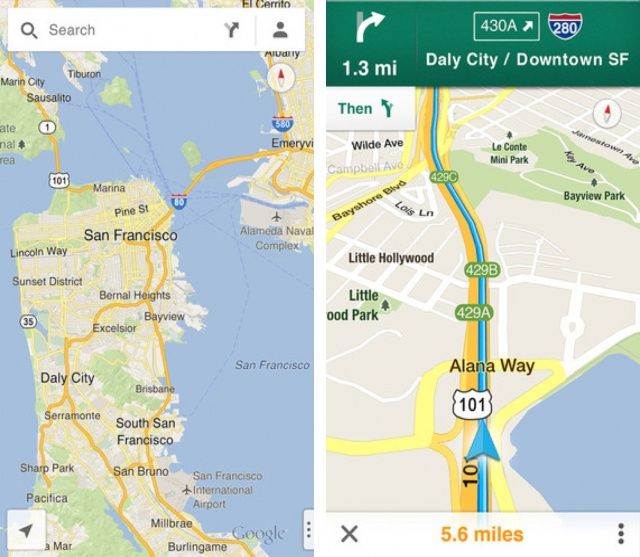 Google Maps is the first of two Google apps to feature in our best of 2012 roundup, and some would say it’s also the best. Unlike Apple’s own solution, it’s impressively accurate, and it looks fantastic — even Google thinks it’s better than its Android app. Furthermore, it’s completely free. It couldn’t get any better (although it could be iPad compatible).

Google Maps offers all the features we grew attached to prior to iOS 6, including Street View, transit directions, and more — plus new features, like Google’s own voice-guided turn-by-turn navigation service, and live traffic information. The app has been so popular that in just a few days, it saw a whopping 10 million downloads, taking it straight to the top of the App Store’s free chart. 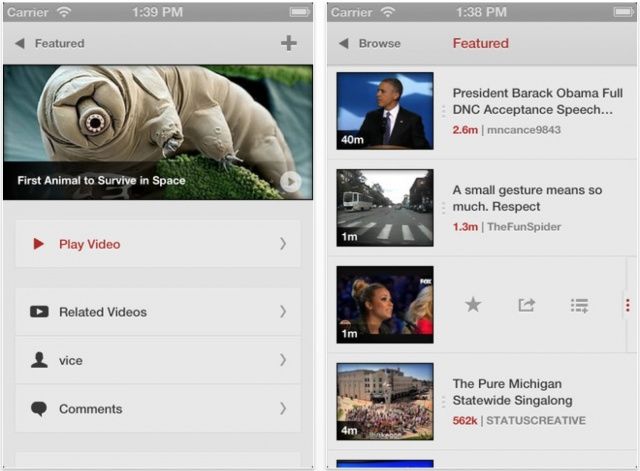 In addition to Google Maps, Apple yanked YouTube out of iOS 6, sparking a new crop of third-party YouTube apps. Jasmine is one that really stands out, and we think it’s better than Google’s official YouTube app. It sports a nice, clean user interface, with features like playlist support, parental controls, AirPlay compatibility, and the ability to post comments and replies.

It also allows you to share your favorite videos on Facebook and Twitter, and even includes a night theme for browsing YouTube in bed. The thing I like most about Jasmine is its look; there are a lot of third-party YouTube clients out there, but none are as pretty as this one. 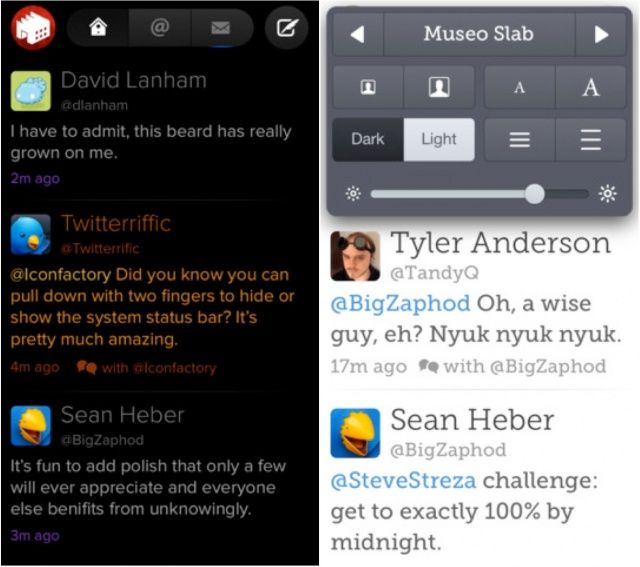 Twitter’s official iOS client isn’t the best, so you should certainly be checking out Twitterrific as a replacement. The App Store offers a lot of pretty Twitter apps, but this one is arguably this year’s best.

Twitterrific looks nothing like the app it used to be. Thanks to its version 5 update, it sports a beautiful new user interface that’s very customizable, and lots of terrific new features. It’s nice and clean; it doesn’t get in your way too much, yet it’s well-designed and incredibly good-looking.

The best part about its UI is its customization options: You can change fonts and font sizes, switch between dark and light (black and white) themes, and change the line-spacing between text. A feature I really like is the ability to automatically switch to the dark theme at night — perfect for tweeting in bed. 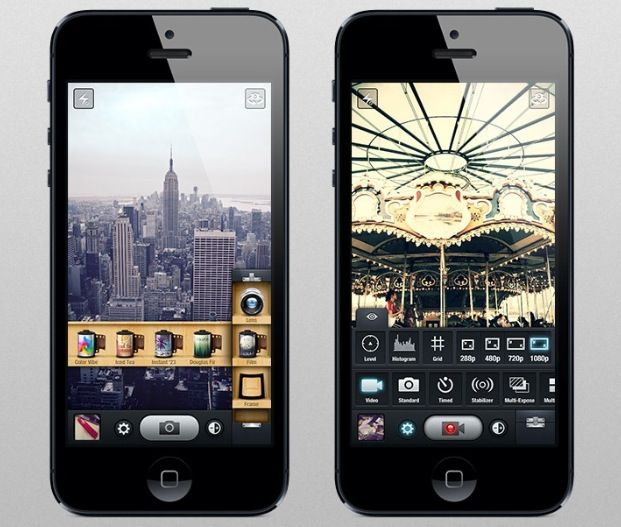 KitCam is an awesome new photography app that I’ve been playing around with a lot lately; it’s actually replaced Camera+ on my iPhone’s home screen. As you’d expect from a good photography app, it’s packed full of great features that allow you to take better photos with the device that’s always in your pocket — and yet it’s not all all difficult to use.

KitCam boasts 13 lenses, 30 films, and 18 frames — all of which can be applied to turn any drab photo into a masterpiece you won’t want to delete. It offers face detection, a low-light boost mode, multiple exposures, and auto and manual focus modes. There are also multi-shot and time lapse modes, and you can shoot HD video.

KitCam allows you to apply effects to your photos before you’ve actually snapped the image. Simply pick your lens, film, and frame, then see exactly how the photograph will look in real-time before you hit the shutter button. But you don’t have to apply pretty effects if you don’t want to. If you’d like to snap a plain photograph, you can do just that. 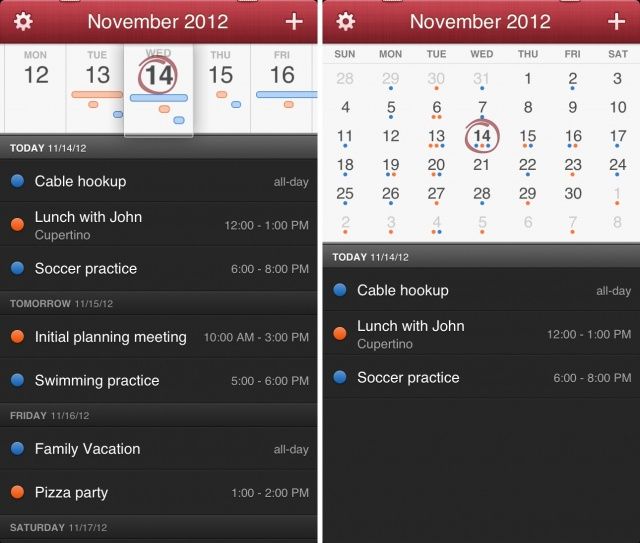 Fantastical has made the leap from Mac OS X to the iPhone, and it’ll change the way you use your calendar forever. If you’re already using this terrific app on your Mac, then you shouldn’t be without it on your iPhone. It’s just as good-looking, and its innovative user interface makes organizing and updating your calendar a breeze.

The great thing about Fantastical is that it allows you to quickly create new calendar entries using natural language, so rather than filling in a stack of different boxes for time, location, etc., you can just type “meeting with Dave at Starbucks tomorrow at 2 p.m.”  It even supports Dictation (on iPhone 4S, iPhone 5, and the fifth-generation iPod touch) — making entries even faster. 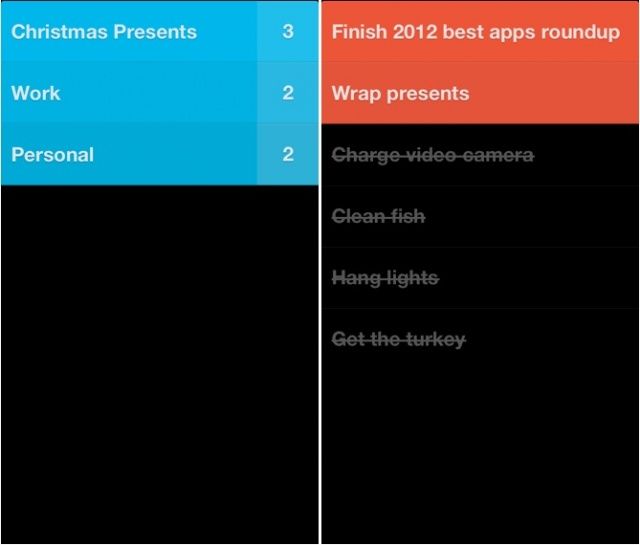 Clear is an awesome to-do list management app from Realmac Software, and it’s quite possibly my favorite app in this roundup; I’ve been using it since the day it was released, and I’m not sure how I’d live without it.

I use Apple’s built-in Reminders app for certain tasks, such as those I’d like to recur at certain times. But for everything else, I use Clear. It’s great for making quick lists, such as things to buy from the grocery store, books to read and movies to watch, and jobs you need to complete at home or at work. In recent weeks, I’ve also found that it’s super handy for keeping lists of Christmas gifts I needed to buy for friends and family.

The best thing about Clear is how fast it is for everything. Creating a new todo is as easy as pulling down on a list, while completing it requires a simple swipe to the right. Clear’s user interface is entirely gesture-based — there are no buttons — and it works incredibly well. In fact, I wish more iOS apps took this approach. 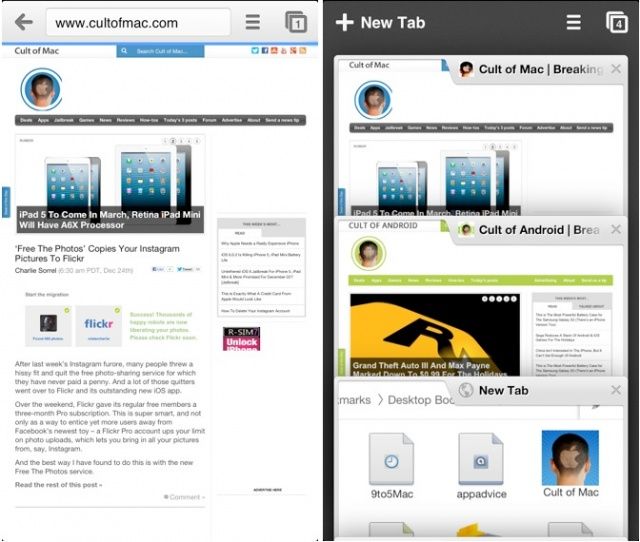 Google Chrome is by far the best third-party web browser on iOS. If you’re looking for a Safari replacement, this should be it — particularly if you’re already using Chrome on your desktop.

It allows you to sync your bookmarks and your tabs across all of your devices, allowing you to walk away from a webpage on your computer and open it up on your iPhone with just a couple taps. Simply sign in with your Google account, and everything will be waiting for you — including your saved passwords.

As you’d expect, Chrome also supports multiple tabs, and you can quickly flick through them like a handful of playing cards to find the page you’re looking for. Other features include incognito mode, desktop view, fast search, and support for offline pages. 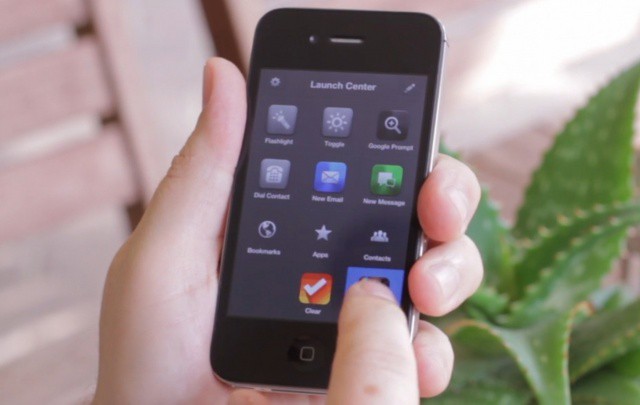 Do you find you spend too much time hunting around inside your apps for specific actions? With Launch Center Pro for iPhone, you can skip this process by launching the action instead of just launching the app. For example, instead of loading up Twitter and then tapping the new tweet button, you can just setup a shortcut within Launch Center Pro that takes you straight to that new tweet window.

You can also add shortcuts to new text messages to specific people, Instagram’s camera, Google searches in Safari, and lots more. The idea is to make a fast dial for all the actions you might use on your phone, and it makes almost every task a whole lot quicker. Like Clear, Launch Center Pro is one of those apps that’s hard to live without once you’ve started to rely on it. 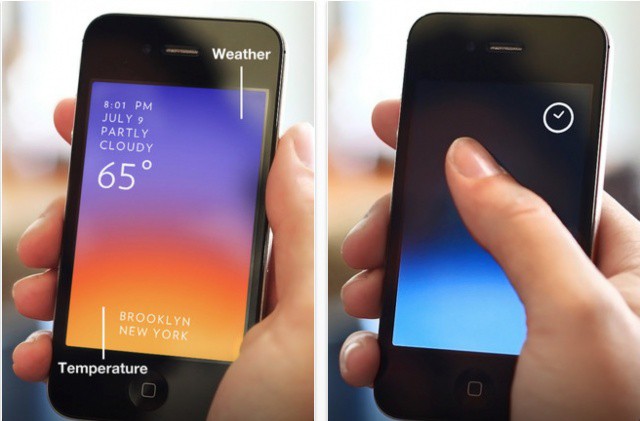 Solar is a stunning weather app for the iPhone that offers a unique interface and a really innovative user experience. It takes things back to basics, with “no vector polygons, no dew point calibration, and it won’t remind you to wear a jacket.” The result is a simple weather app that’s a joy to use.

When you open Solar, you’ll see the date and time, with a brief description of the day’s weather — including the temperature. This information then makes up the app’s colorful background, as you can see in the image above. Swipe down on your display to see the weather forecast for the next three days, or swipe up to fast forward through time to see weather and temperature changes as they happen. Swipe left and right to switch between different cities, or pinch to zoom out and see all four together on one page.

If you’re looking for a weather app that’s simple, easy to use, and more beautiful than anything else out there, you need Solar. 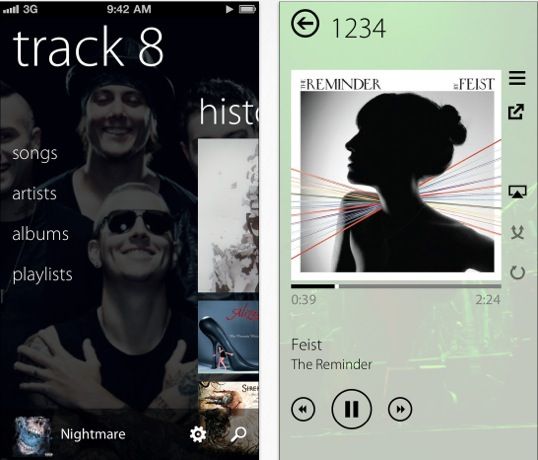 Track 8 is a wonderful Music app replacement that’s designed to look like a Windows Phone app. That might not sound like a good thing, but check out the screenshots above — it actually looks really great. It’s also packed full of awesome features that your built-in Music player doesn’t have, like the ability to share to Facebook, Twitter, App.net, and Day One; the ability to scrobble tracks to Last.fm; gesture controls; and more.

You can also customize the apps appearance, and then sync your settings via iCloud — so Track 8 will look the same across all your iOS devices.