Clean and simple design has always been a plus for Rdio, and the new iPhone and iPad apps reflect that design taste.

Version 2.0 of Rdio is nothing short of a complete visual overhaul, and it looks fantastic. The interface elements are minimal, and the overall aesthetic is a lot like Microsoft’s Metro design while still feeling very Apple-like. The grid-based navigation of old is gone, and a familiar sidebar has been added to access different areas of the app. You can visit Heavy Rotation, Recent Activity, Top Charts, New Releases, and of course your own music. 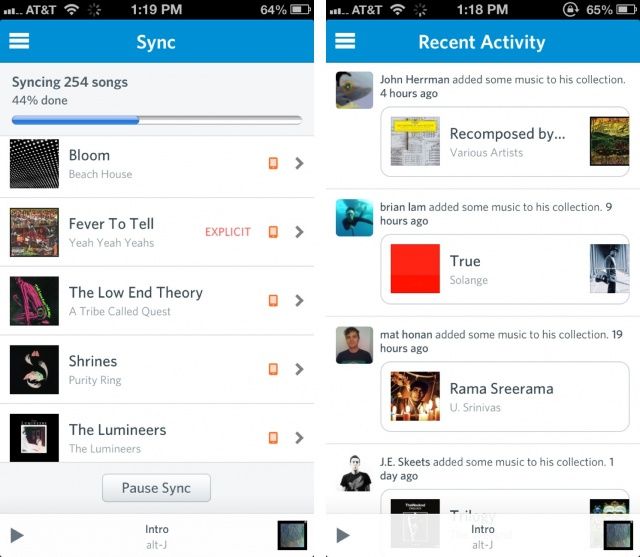 The typography and simplicity of Rdio is just gorgeous. My colleague Buster Heine says that the new iOS app feels a lot more like Rdio’s web app on the desktop. He likes it. A clean web player has been one of the main draws of Rdio over its competitors, but recently Spotify began testing its own web app on the desktop. I’ve tried both, and Rdio’s is much more user friendly—not to mention that Spotify’s runs on Flash. Yuck.

Anyway, Rdio 2.0 also includes enhanced queue management that syncs via the cloud, meaning you can finally edit a queue on your Mac and pick up where you left off on your iPhone. A new remote feature lets you control music playing on your Mac from the iPhone app, but early reviews are saying that the experience is kind of clunky.

Rido technically has about the same amount of songs as Spotify, but Spotify has continued to gain more traction with its free, ad-supported model. See, Rdio doesn’t offer a free-with-ads deal, only a short trial run. $5 will get you unlimited everything on the desktop (including a native Mac app), while $10 gets you access to the mobile apps as well. If you’re interested in something like Spotify, or are considering switching, Rdio is definitely worth considering.

After today’s update, I may just be switching from Spotify myself.