Right now, iOS’s notifications system is curiously bifurcated in design between the alert bubble system of iOS 4 and the banner notifications that appeared in iOS 5. A new concept floating around, though, has some great ideas on how these systems could be merged in iOS 7 by a new iOS UI design team lead by Jony Ive.

Over at The Verge, user Sentry makes the case for a new steamlined notifications system that takes iOS 5/6’s banner-styles and applies them to pop-up alerts, like so: 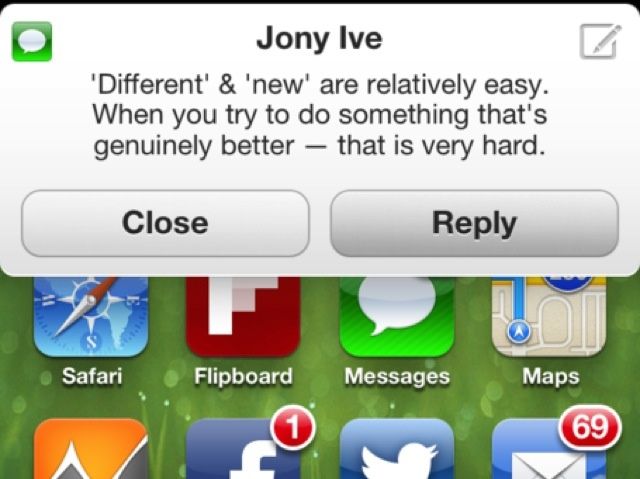 [When] iOS 5 came around, [Apple] added a new type of alert. It brought a long overdue upgrade to the notifications system, by introducing an alert style that didn’t put a complete halt to whatever you were previously doing; banners. Banners are minimal and provide information in a condensed format that doesn’t need to take up the entire screen.

One problem; the pop-up alerts still exist, and have gone unchanged. (for example, alerts don’t show an app icon indicator, which banners do despite taking up less space)

Not only are they visually outdated, but they also visually segregate the app-based notifications into two unique UI styles (opaque white vs transparent dark blue). So why not unify the visual forms, and in the process finally get rid of the circa-’07 alert pop-up?

The meat of the concept is the biteSMS-like quick reply button, which allows you to quickly type a message in text-based apps.

But what about system alerts not tied to an individual app via push? Sentry imagines a solution something like this:

I think it looks great, and it looks like some iOS jailbreak devs might already be trying to turn this concept into a reality. What do you think?