The previously lackluster WordPress iOS app has been updated with a host of new features and improvements that make it more appealing to power users. The new version also features a design overhaul and the sidebar menu interface seen in other popular apps like Facebook and Path.

★ Major UI Refresh!
– New sidebar menu for quick navigation.
– Sliding panels on the iPad for greatly improved navigation and ease of use.
– Updated colors and graphics.
– Improved sign up experience.
– New app icon.
★ Support for Post Formats.
★ WordPress.com Reader and Quick Photo added for the iPad.
★ New Simple post preview feature for the iPad.
★ All-new WordPress.com stats.
★ New WordPress.com Friend Finder feature helps you find your friends blogging on WordPress.com.
★ Landscape orientation support throughout the app.
★ Easy access to your site – view it and access the web dashboard right from the app.
★ Last but not least – many reliability improvements and performance tweaks.

For bloggers like myself, this biggest addition is the ability to upload photos natively inside the app on the iPad. The lack of this feature has forced many writers, including our own Charlie Sorrel, to resort to third-party apps like Post and Blogsy for uploading images on the go. 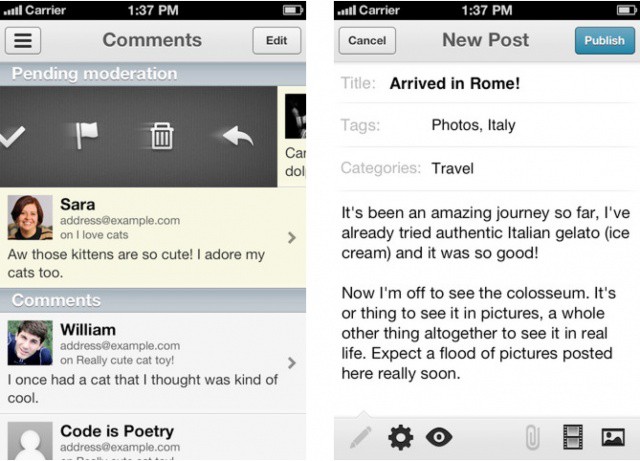 You can download the new version of WordPress for iOS now in the App Store.