Yesterday, if I had suffered a grievous accident involving some kind of heavy farm machinery, and my fingers were mangled to leave only a single, stubby nubbin where previously I had sported ten beautifully slender digits, I’d still have been able to count the entirety of half-decent iPad blogging apps on one hand.

Today, though, I’d have to start counting on my toes, as Black Pixel software, the company behind Apple award-winning app Versions, had launched Posts, and you might like to call it the Reeder of blog publishing.

Just as Reeder took the iPad and made the first RSS reader that took advantage of the little touch screen, so Posts is a gorgeous, easy-to-use publishing app. It works with the main blogging platforms: WordPress (hosted or not) and Blogger, and if you don’t already have a blog you can set one up from within the app.

This part is dead easy. For Cult of Mac, I just taped in the address of the site, my user name and my password. Auto discovery did the rest and even over 3G the last few days worth of posts were pulled down in seconds. Which leads me to…

The problem with almost every other blogging app is the interface. They’re all ugly, and mostly hard to navigate. This could be because they’re trying to fit in so many features, but developers like the Omni Group manage to push out incredibly powerful software like OmniFocus without UI complexity.

Posts is a 1.0 release, and lacks some features (more on that below) but what is there works great. The main view shows thumbnails of all your previous posts, complete with the picture, headline and lede. It even gives you the publish time and the name of the blog (if you’re posting to multiple sites, this is handy).


Along the left side you navigate the sections. This allows fast access to WordPress Pages (kind of permanent posts, which we use at Cult of Mac to privately share things like style guides) and even comments. I can’t, ahem, comment on the comments, as we use a third-party comments service instead of the native one.

Drafts also show up — on perforated legal paper no less — making them easy to pick out. They’re lined up by date so you can ignore older posts. One thing I can’t seem to find is Pending posts. Pending is a section for finish posts which are ready for editing, and we use it for reviews and other things that need to be copy edited before being posted.

In short, the app is gorgeous to look at, and takes full advantage of the new iPad’s Retina display.

The sweetest layout in the world won’t help if a blogging editor’s posting engine is a piece of crap, and Posts scores here as well — as long as you’re writing in rich text: The HTML editing side is a mess: 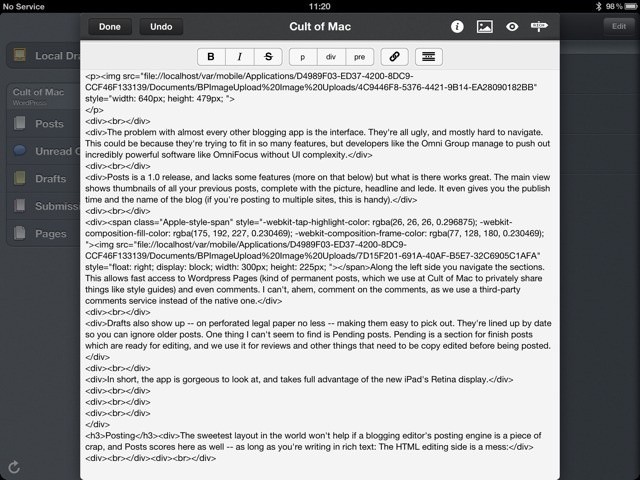 Ugh! Not only does it squish everything together, and add <p> and <div> tags like a trucker adds sugar to his coffee, but it lacks a lot of basic HTML markup (more in the What’s Missing section below).

Switch to the RTF side, though, and things are way better: 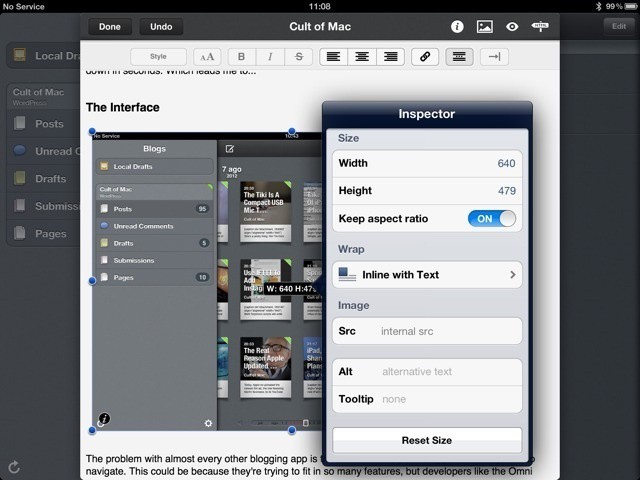 Here we see the image insertion tool, which is the best I have seen on iOS, period. Tap the picture button up in the toolbar and the standard photo picker pops up. As this includes the last screenshot you took, it is an almost perfect tool for writing software reviews. I’m currently working in offline mode thanks to a 3G outage on my summer travels, so I’m not sure how the actual image upload is going to work (Cult of Mac only accepts JPG uploads, and iPad screenshots are PNG), but swapping out images should be easy with this fantastic interface.

Like Blogsy, Posts also lets you resize images as you add them, including size increases  (via a popover inspector or just by dragging handles on the image itself). Unlike Blogsy, it won’t let you add captions. I have a TextExpander snippet which can do this for me, but as Posts doesn’t yet support TextExpander Touch, I’m out of luck there too. 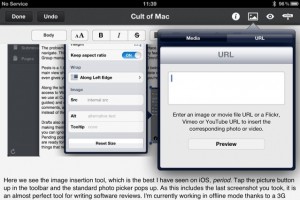 Want to add a video, or an image linked from elsewhere on the web? Posts will do that too. Just tap the “URL” option at the top of the Image popover and you can add a link to an image, or embed videos (and preview them right there). But given that most video sites now give you a nice HTML5-friendly code snippet to paste right into the page, this mightn’t be quite so useful.

Rich Text editing works great. The toolbar gives access to bold, italic and strikethrough text, as well as headings, blockquotes and  “Pre” styles. To access these you will have to use the toolbar, though, as the familiar Command-B and Command-I keyboard shortcuts don’t work. Perhaps iOS6, with its rich text support, will bring this. Otherwise, it’s no big deal.

Linking is a dream. Not only can you quickly add a URL from the clipboard using the popover, you can also search previous posts and link to them. 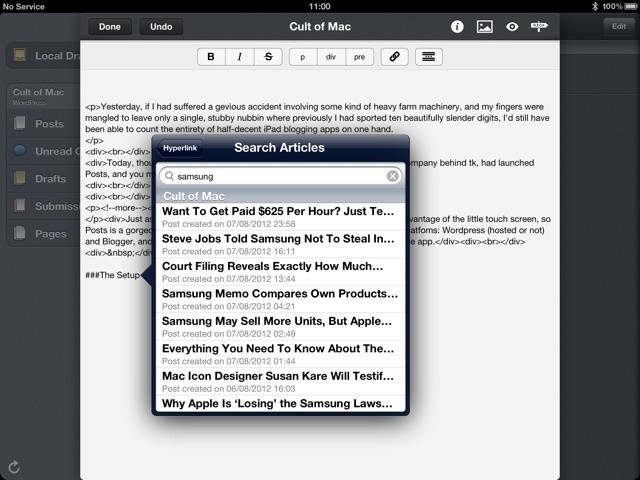 This obviously gets more useful the more posts you have saved in Posts, and time will tell if more posts makes search slower, but for quickly linking to another article from the last few days (for a breaking story, perhaps) then this is near ideal, and as far as I know, unique to Posts.

And this search is local, so you can use it without a connection…

Everything that happens in Posts, stays in Posts. Until you publish that is. The app will work perfectly whilst offline (as I am right now). This means that the pictures are added to the editor without first uploading. This of course makes the actual posting a little slower, but it means that you can finish a post in its entirety without a connection, and just publish it when you get back online. 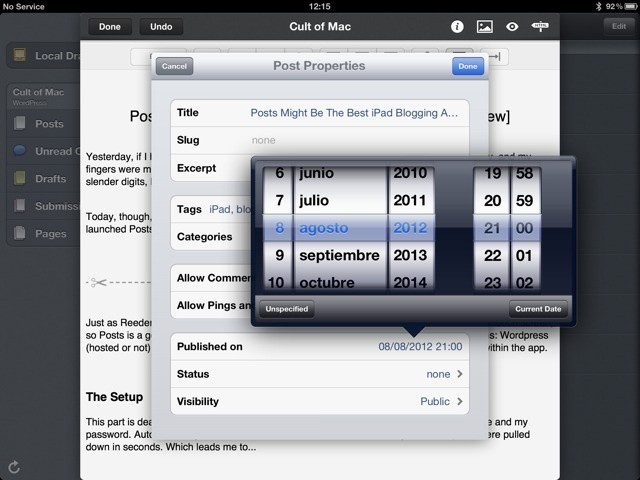 The “Info” box, accessed using the “i” button in the toolbar, is very similar to the one in Blogsy. You can add a title (if you didn’t write it in the post’s title field already), tags and categories, choose a publish date, and choose the post type (draft, pending, published, private). You can also toggle comments, disable trackbacks (thank God) and tweak other settings.

It’s worth noting that Tags and Categories appear to be refreshed when you sync the app with the server, which means that the list is ready immediately. Blogsy, by contrast, updates the categories every frickin’ time you open the Categories box (with no way to cancel out quickly). This is a pain even on a fiber connection. 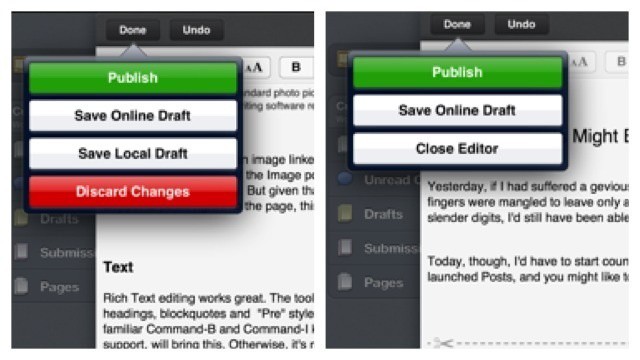 When you’re done, you can preview your post in style-free browser view (which is so similar to the RTF editor there’s not much point), or you can hit “Done.” Depending on the saved state of your post, you’ll see one of the two dialog boxes above. On the left is the dialog you’ll see if you are currently editing a post. It is rather confusing, and I had to think twice every time I used it to exit a post or to save (which I did often, as you should when writing a lot of words in an untried tool).

The popover on the right shows when you have opened a draft post but not edited it yet. Simple and almost error-free.

For a v1 release, Posts is solid, and very stable. While writing this post things got a little sluggish so I force-quit the app and relaunched, and everything is fine. But could I use it as a sole tool for blogging?

In short, no. There’s no way to read a web page while writing, for one. This appears to be a design decision though, not a missing feature. First, there are apps like Writing Kit which will let you do this already, and can send their HTML over to Posts using the clipboard and — given the fugly HTML Posts makes on its own, this is probably a good idea.

Bigger omissions include a lack of support for TextExpander Touch, as mentioned. This is pretty mush essential for any writer, so I can only guess it’ll be added in soon.  It would certainly go some way to mitigating the lack of captions and other HTML entities like tables.

Also missing is Markdown support, John Gruber’s human-friendly markup language. This would certainly be a handy third pane editor in addition to HTML and Rich Text, but again any writers making heavy use of Markdown will likely be using another app to do it. It would, though, let writers add things like bulleted lists and similar.

Also missing are some default settings. Having to resize images every time gets old, fast: it seems that the default insertion size is 650 pixels, which is fine if you want all your images at that size. It would be nice to have the option to pick that figure ourselves.

Finally, there’s no find-and-replace, which means that you might find a rogue “tk” somewhere in this post.

Posts is hugely impressive, and even more so considering that it is a v1.0. That’s not a big surprise, as it comes from the developers of the excellent tk. Sure, there are some gaps, but nothing that can’t be filled in later. The most important parts are already there, and already as slick, smooth and stable as they need to be for a pro tool.

For most bloggers, this will be all you need to work. For those who need to do research while writing, you’ll likely already be happy using something like Writing Kit for that, or you can just buy an iPad 3 so that four-finger swiping between apps is fast enough to seem like window-switching on OS X. Either way, $15 is a small amount to spend on an app that will let you assemble your posts, and the image-insertion tools might be worth the money on their own.

In short, Posts comes as highly recommended: I wrote this entire post in it, as a first-time user, and it neither crashed, nor confused me, nor made me scream and hurl my iPad across the room. Instead, it just got out of the way and let me work, whilst occasionally delighting me. And I can’t think of better praise than that.