The patent war between Apple and Samsung is just starting to heat up, with both tech giants scheduled to appear in U.S. court today. Apple accused Samsung of copying the iPhone and iPad back in April 2011, and Samsung countersued with similar accusations. In the months leading up to the trial, there have been treasure troves of previously hidden information uncovered, including hundreds of early iPhone and iPad prototype designs.

One design in particular, aptly named “Jony,” sparked an accusation from Samsung saying that Apple borrowed from Sony’s designs to create the first iPhone. To combat Samsung’s claim, Apple has since produced an early (and possibly first) prototype design of the iPhone from circa 2005.

“Purple” predates the Jony design Samsung wants to use as evidence against Apple in court, reports The Verge. Samsung’s accusation centered around Apple designer Shin Nishibori and the Jony prototype he designed under Ive’s guidance. Nishibori was said to have been inspired heavily by Sony’s design principles, and Samsung wanted to use the Jony prototype as evidence that Apple copied another tech company while creating the original iPhone. Fueling the courtroom drama, Nishibori has refused to appear in court to testify, citing that he no longer works at Apple. 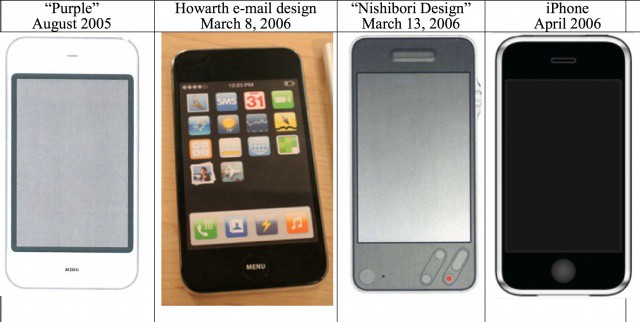 According to Apple’s lawyers working on the Samsung case, the Jony prototype was just “an ‘enjoyable’ side project” that didn’t influence the final design of the original iPhone. Essentially, Purple came first and was the basis of the first iPhone, while Jony was just an experimental deviation during Apple’s development process. As you can see, Purple also looks a lot like the iPhone 4.

The judge in the Apple vs. Samsung trial has forbidden Samsung of using the Jony prototype as evidence against Apple in light of this new evidence.

Apple is a company that constantly prototypes different product designs. It’s not surprising that at least a few concepts borrow from the competition. Fortunately for Apple, the finished products are what counts.