Apple’s rivals are already producing smartphones with NFC capabilities, and although NFC is yet to really take off, it’s still capable of some pretty incredible things that we all want from our smartphones. However, there has been some debate about whether or not Apple will adopt the feature, or create an alternative of its own — possibly utilizing Bluetooth.

Since the company unveiled Passbook in iOS 6, that debate has hit an all-time high. Passbook would work wonderfully with NFC, and would allow us to ditch physical cards and tickets in favor of a “contactless” system in which we just hold our devices up to a sensor. And according to a newly granted Apple patent for “iTravel,” it appears the Cupertino company is just as excited about that prospect as we are.

The patent, which was uncovered by UnwiredView, describes a new ticket service just like Passbook that works with NFC:

The main focus of the patent is how you would use your next iPhone with NFC chip at the airport check-in. It includes loading your ID info such as picture, retinal scan and fingerprint data from modern passports with embedded radio frequency identification tags. Collecting your ticket information from reservation confirmation e-mails/notifications, or extracting reservation images via optical character recognition software, barcode-reading software, or QR-code-reading software. Providing the necessary information at the NFC equipped check-in counter, and receiving the boarding pass with luggage info in exchange. Using the stored ID to pass through airport security, etc.

Doesn’t that sound great? No more worrying about boarding passes, passports, and tickets; just make sure your iPhone is in your pocket and you’re good to go. 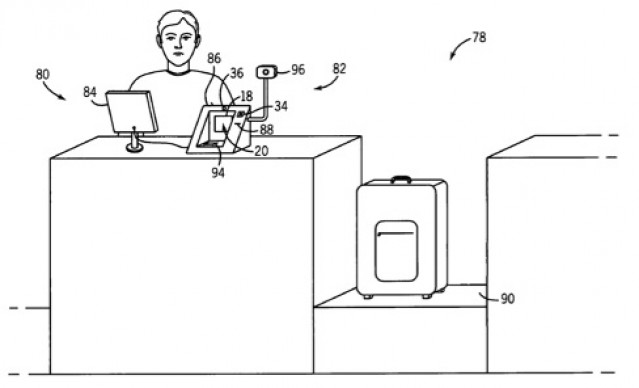 MacRumors notes that this particular patent was actually filed for back in September 2008, but was only recently granted by the U.S. Patent & Trademark Office. Now that it has been granted, however, Apple has better protection for the service should it choose to use it. And we’re certainly hoping it will.