While we’re all expecting Apple to introduce a quad-core A-something processor to its iOS devices at some point in the future, it appears there are already references to the devices in the company’s latest iOS 5.1 beta release. In addition to support for Apple’s latest dual-core A5 processor, the software also support quad-core processing, according to one report.

Extremely reliable and knowledgeable people familiar with iOS’s inner workings explained to me that core references begin at “0.” For example: A single core device would be limited to  ”/cores/core.0,” and a dual-core device would come in at  ”/cores/core.1.” A “core.2″ (which is not referenced in iOS code) would be a triple-core processor according to this labeling method. iOS 5.1 beta 2 now includes core.3, a seemingly quad-core chip from Apple.

The report provides a comparison between the new core management software in the latest iOS release, and the same software from previous iOS 5 releases, which reads “cores/core.1” as opposed to “cores/core.3”: 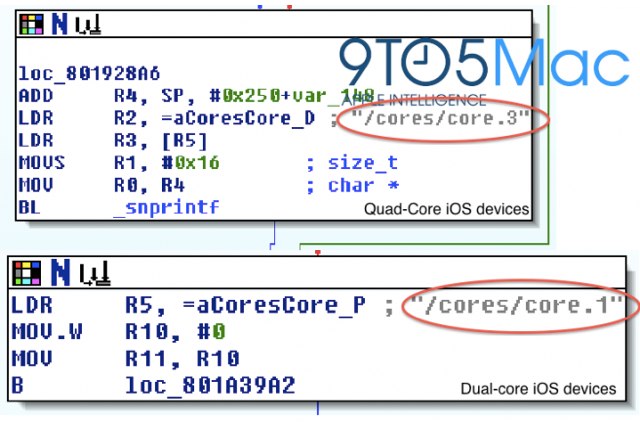 So why is this news so exciting? Well, the iOS 5.1 release is likely the software Apple is currently using to test its third-generation iPad, and even the sixth-generation iPhone. If indeed “core.3” point to a quad-core processor, it would suggest the support is there specifically for these devices, and that quad-core processors might end up in our iOS devices sooner than we think.

Not only will quad-core iOS devices be faster, but the new chip could mean other improvements are on the way, according to 9to5Mac’s report:

A quad-core processor can help devices power very high-resolution displays (such as the rumored iPad 3 with a Retina Display), and even power very advanced software like a rumored Final Cut Pro for iOS.

According to a report from DigiTimes earlier today, we could see the iPad 3 — and Apple’s first quad-core processor — as early as March.