Apple recognized World AIDS Day Thursday with a reminder about how customers can join the fight to end AIDS. They can help through Product (Red) purchases, downloading and sharing new red Apple Watch faces and other means.

“Over the past 16 years, Apple and its customers have been part of the global fight to end AIDS,” Apple said. The (RED) partnership sends a portion of each purchase to the Global Fund, headquartered in Geneva, Switzerland.

The huge nonprofit provides access to healthcare services to millions of people in sub-Saharan Africa, where communities are badly hit by HIV/AIDS. The work supports rural communities lacking services, as well as pregnant women and their families. And for the past three years, funding has helped reduce COVID-19’s impact on those beleaguered communities.

Apple support since 2006 by the numbers 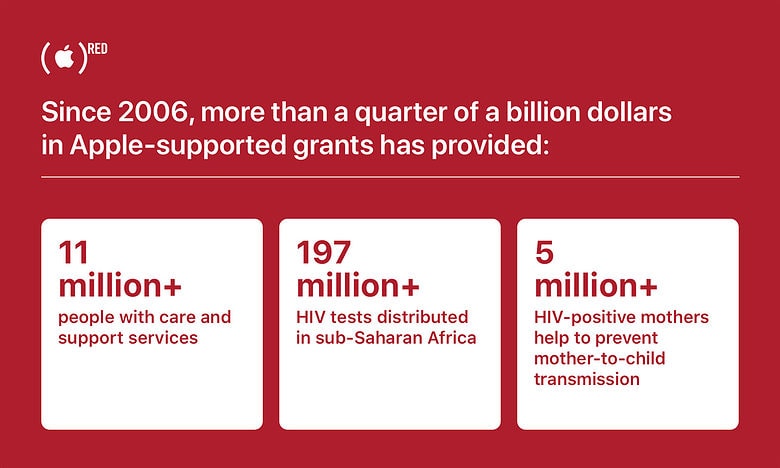 “In honor of World AIDS Day, Apple is offering new ways for customers to continue to support the Global Fund, raise awareness, and learn more about the battle to end HIV/AIDS,” Apple said. It noted that (Product) Red ranges across iPhone 14, iPhone 14 Plus, iPhone SE, and Apple Watch Series 8.

And it’s easy to add your support. You just buy the red one, and your purchase does some good.

In addition, you could purchase (Product) Red accessories, including the Silicone Case with MagSafe for iPhone 14 and iPhone 14 Plus, as well as the Apple Watch Sport Loop, Sport Band and Braided Solo Loop bands.

Apple Watch users can show support through seven red Apple Watch faces that are now available. Users can download the faces from apple.com/product-red. Then feel free to share them with other Apple Watch users, Apple said.

And Apple is raising awareness of and learning about HIV/AIDS in other ways, too: