The Do Not Disturb mode built into iOS is excellent. It hides incoming alerts, and generally stops you from being disturbed by outside forces. But it won’t save you from yourself. What if you accidentally click on a YouTube link or — more likely — that GIF you clicked in Tweetbot turns out to be a noisy video? The sudden racket will surely wake your spouse.

Today we’ll see how to make a shortcut that automatically silences your iPhone whenever it enters Do Not Disturb mode.

Mute your iPhone in Do Not Disturb

For this trick, we need to use the new Shortcuts Automations that came in iOS 13. These let you trigger a shortcut automatically, based on an alarm, arriving at a location, and other parameters. These parameters include switching on Do Not Disturb mode.

Shortcuts doesn’t let you share automations, so you’ll have to follow along and create your own. Fortunately, this won’t take long. The basic shortcut only consists of two steps. 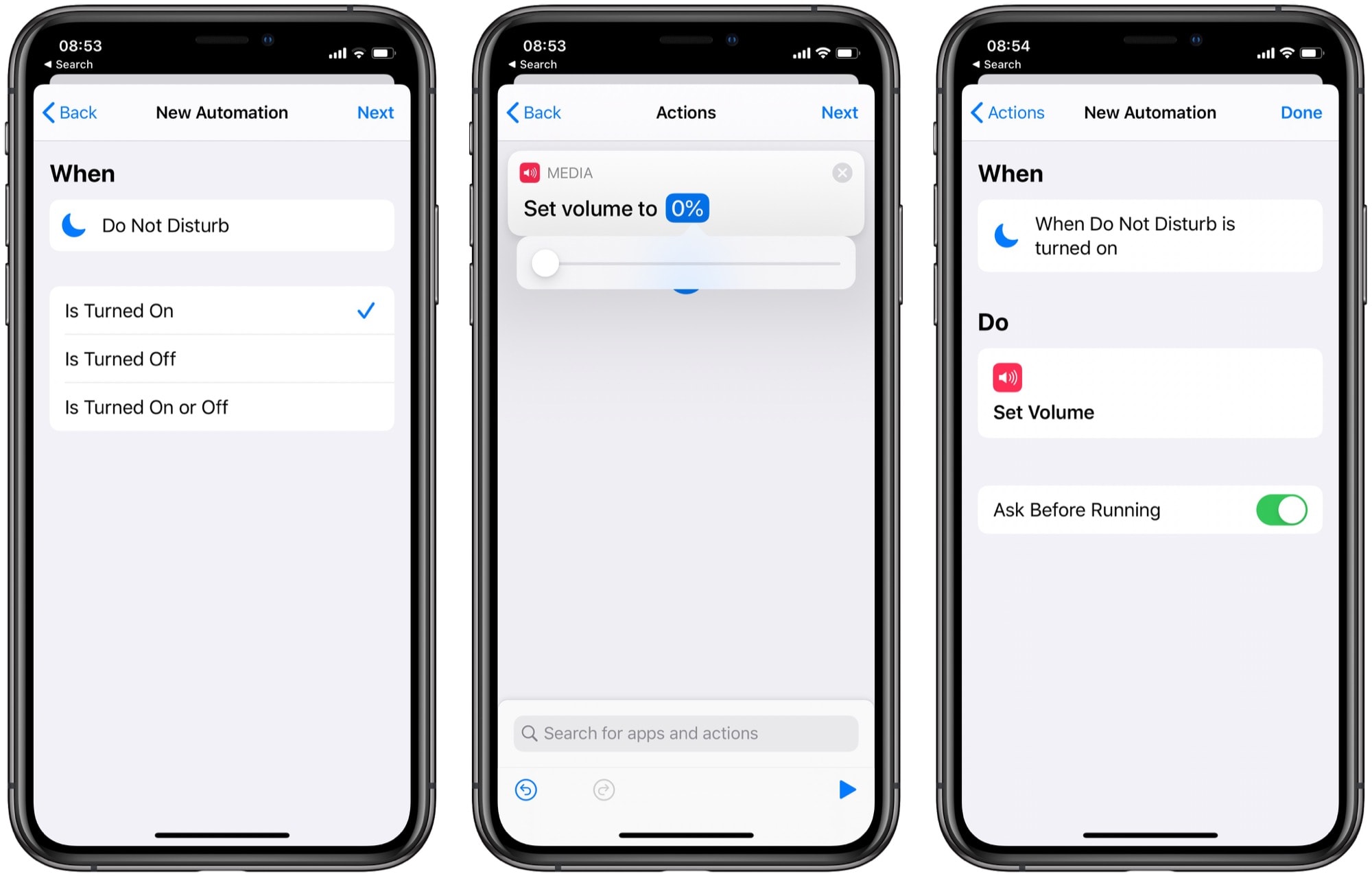 All you need to do is create a new Automation (the center tab on Shortcuts’ main screen), choose Do Not Disturb as the trigger, and Set Volume as the action. Then, use the slider to crank the volume down to zero (or just to a low level). Finally, decide whether the shortcut should run instantly, or whether it should ask you first.

If you set the Shortcut to Ask Before Running, it will pop up an alert to ask you whether you really want to silence the volume. However, you may have spotted a flaw in this setup. Because your iPhone is in Do Not disturb mode, you won’t see the notification. One oddity to note: This shortcut runs if I put the iPhone into Do Not Disturb from the Apple Watch, or using the Do Not Disturb schedule. But it doesn’t run if I toggle Do Not Disturb manually.

On the other hand, if you let the shortcut run automatically, you may suffer unforeseen consequences. For instance, if you’re listening to music or a podcast, it will be muted as soon as you enter Do Not Disturb. Maybe you have Do Not Disturb at Bedtime set to kick in at 10 p.m. every night. If you’re in the middle of a romantic interlude, then the Barry White track is going to suddenly go silent. That may not be what you want.

I like this shortcut quite a lot. I actually set my version to turn the audio down to 10%, which gives most of the same benefits, without confusing me — I might end up wondering why no sound is coming from my iPad. And the advantage of shortcuts is that you, too, can easily customize them.