Don’t update your Mac to macOS Catalina without doing some serious checking first. The new Mac operating system makes some deep changes, which means that at least a handful of apps on your Mac will break. And that’s probably the best-case scenario. If you’re a long-time Mac user, this could be a chaotic update for you.

So, how do you know which apps are going to break in Catalina? Here are two ways to check.

The biggest change in Catalina is that 32-bit apps will no longer run. This has been coming for a while. Way back in High Sierra, Apple started warning us that certain apps were no longer compatible and would stop working in future. That future arrived with the macOS Catalina update. You can read all about 32-bit apps in this Apple support document.

To quickly check which of your Mac’s apps are still 32-bit, open up the Mac’s System Profiler. Just mouse up to the Apple menu item and choose About This Mac. Then, when that app opens, click on System Report…. If you hold down the ⌥ key when you initially mouse over the Apple Menu, About This Mac will change to System Information…, and you can click that to go straight there.

How to see all the 32-bit apps on your Mac

Now, in the sidebar, click on the Applications entry. It’s in the Software section of the sidebar. This lists all the apps on your Mac. One of the columns is named 64-Bit (Int… 1. Click on the column header to sort that column. You’ll see all your apps split into two groups — 32-bit and 64-bit. Check the 32-bit list to see which of your apps will stop working if you update to macOS Catalina.

You can probably discount most of the Apple-made apps, as Cupertino will update them for the new OS2. But for the other apps, you should either check the website to see if there is a new version available, or start looking for a compatible alternative.

If you skip this step, and decide to just wing it and update to Catalina anyway, the installer will show you a list of apps that are now useless to you. 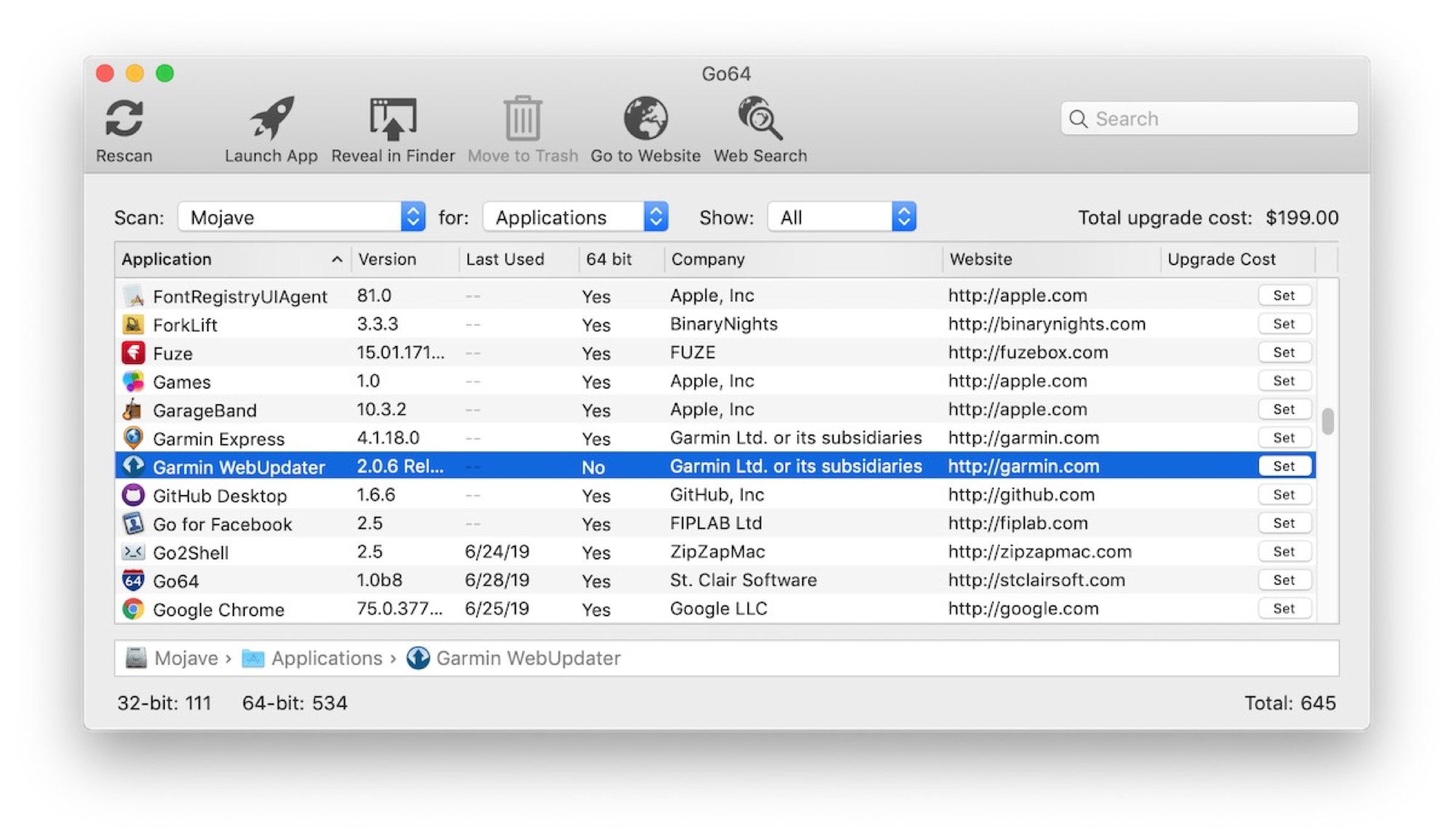 St. Clair Software, a veteran Mac developer, offers a free app called Go64 that can help you check Catalina compatibility. It will show you all the incompatible apps on your system, and make it a lot easier to investigate their current status. Go64 also includes links to these apps, and keeps a running tally of the cost of upgrading them.

It’s easy to just click Update on your Mac and hope for the best. But Catalina is almost guaranteed to break something on your Mac, so you really should do at least the minimum checking to see what will break. Perhaps old, never-used apps will be the only ones on the obsolete list. Or perhaps your favorite app’s developer just hasn’t managed to update it yet. But check. It’s easy, and it’s free.