A futuristic, sci-fi rhythm game called Cytus II is just of one of our picks for this week’s “Awesome Apps of the Week.”

In addition, we’ve got a great music transcription app, a frantic explosion-driven platformer, and… Microsoft Office? Check out our selections below. 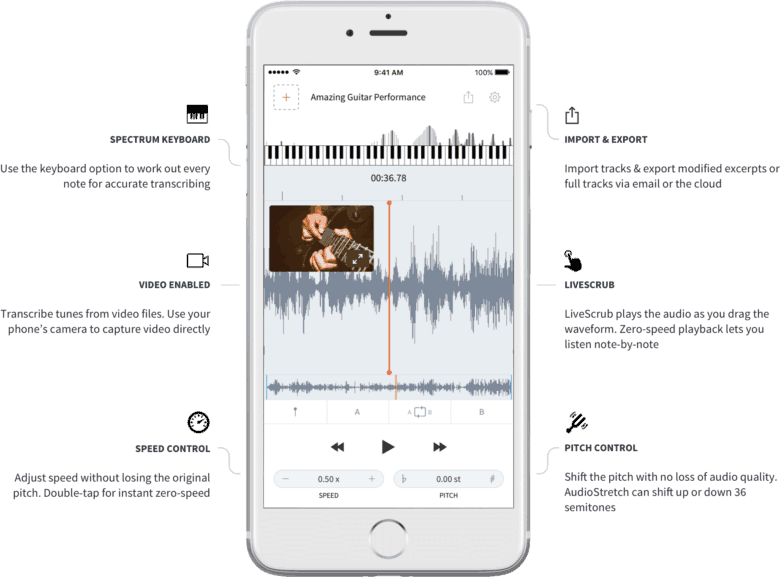 My colleague Charlie Sorrel wrote about this app in detail during the week, but it’s worth repeating here.

While it’s easier to watch YouTube tutorial videos, the very best way to learn to play a song is to transcribe it, since this forces you to listen, and to work out not only the notes in the song, but how and where to play them. AudioStretch is a “music transcription tool” which lets you slow down music, and/or change its pitch so you can learn to play songs.

The app shows you the music track as a waveform, which makes it easier to grab the track and scrub it back and forth to identify notes more easily. You can also do this with video, which can be particularly useful for learning a piece of music — particularly if you can find good live footage of the artist playing it.

It’s available in both a limited “lite” version for free, and a more feature heavy full version for $10.

A music rhythm game set in the future, Cytus II is made from the same Rayark Games developers who previously made the excellent Cytus, DEEMO and VOEZ. The game boasts more than 50 tracks, including a range of genres, 150 different maps, and a story-driven element, which isn’t exactly common in this kind of game.

In total, it adds up to a lot of fun — and that’s from someone who isn’t a massive fan of a lot of the rhythm games I’ve played.

Available for: iPhone, iPad
Cost: $1.99 (with in-app purchases)
Get it from: App Store

No, you haven’t read that wrong: Microsoft Office 2016 is one of our apps for the week in 2018. That’s because its macOS version just added a useful real-time collaboration update which makes it easier to share the workload with colleagues.

The feature is available in Word, Excel, and PowerPoint, and makes Office 2016 competitive with one of the best elements of Google Docs.

When working together, users will now see a thumbnail in the corner of their window that shows them who else is editing the same document. A flag will also be visible in the document where another person is editing, and you can watch the changes as they happen.

To make collaboration easier, Microsoft will also now auto-save your work at regular intervals, as well as saving version history, so if someone happens to mess something up, you can view the version history for a list of changes and roll back to an earlier version of the document.

It’s Full of Sparks is an innovative platform game with a unique concept. You play as a firecracker, with your goal being to get to the end of each level as quickly as possible, before your fuse burns down and you explode.

There’s a good combination of speed and puzzling involved, and getting your firecracker to the end of each level just in time is immensely satisfying. In all, it’s an enjoyable game that offers a fresh take on an established formula.

Available for: iPhone, iPad
Cost: Free (with in-app purchases)
Get it from: App Store