This Apple Watch clone costs more than an Apple Watch Edition, but comes with zero apps. The H. Moser Swiss Alp Watch Zzzz might look like it's straight outta Cupertino, but it's actually an old-fashioned luxury timepiece.

Would you pay $26,900 for an Apple Watch clone without all the smart functionality? See our video review for more on this completely bonkers Swiss watch.

The company went on to produce thousands of high-end watches that any die-hard watch collector dreams of (including one with a case made of hardened Swiss cheese). The company even won one of the most prestigious awards within the Swiss watch industry.

Why am I telling you all this? In order to understand the value of a high-end Swiss watch, you need to have some knowledge of its history.

This Swiss Apple Watch clone looks like the original 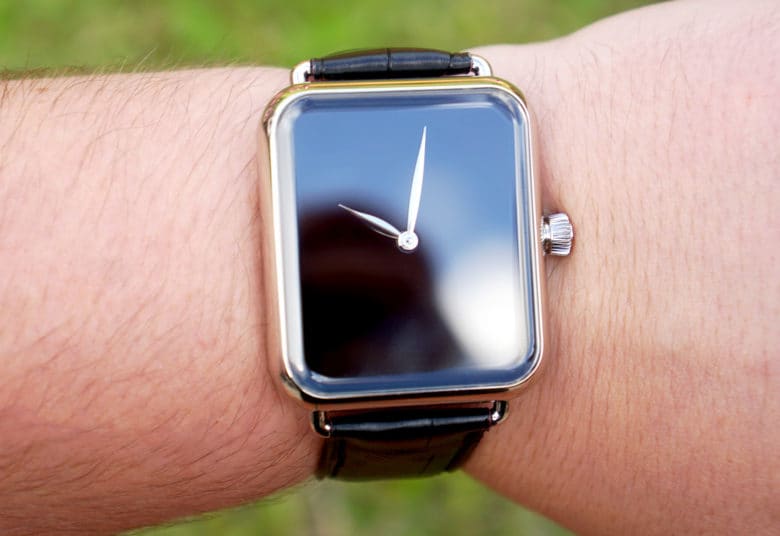 H. Moser's Swiss Alp Watch is clearly based on the Apple Watch. The model comes in a few variations, including the Brrr (with a beautiful blue fumé dial) and the Minute Retrograde (perhaps the ultimate mechanical Apple Watch replacement).

While the names aren’t something I like to say out loud, the styling and quality means I’d proudly wear these watches.

In terms of design, the Apple Watch clones are a slight departure from H. Moser’s usual offerings. While the company has been making a watch similar to the Apple Watch for some time now, the Zzzz model features no indices or logo on the dial. You’ll find the luxury brand's markings on the clasp and on the crown.

The pricey clone measures 38.2mm by 44mm and is 10.3mm thick, making it slightly larger than the Apple Watch, but it still wears well on most wrists. The case is made of white gold, as are the leaf hands floating within.

The Swiss Alp Watch is made to be mistaken for an Apple Watch on standby. But it’s designed for people who can’t walk away from traditional watchmaking — folks who love the heart and soul of a living watch. (The same way that people who love vintage cars look at electric Teslas and such.)

H. Moser is clearly not afraid of being compared to Apple. In fact, the company embraces the challenge. Just take a look at this video to see how far H. Moser is willing to go.

The H. Moser Swiss Alp Watch Zzzz features an in-house rectangular caliber movement with a four-day power reserve. Having an in-house movement is a must for a luxury brand.

Many high-end watches utilize a movement borrowed or bought from other watchmakers, because an in-house movement means a higher cost. Also, creating a rectangular movement remains difficult to this day. That's why you see so many round watches. Also, many pricey fashion watches utilize a $6 Chinese movement.

Obviously you'll pay more for a handmade, automatic movement like the one inside the Swiss Alp Watch Zzzz is and other luxury brands like Rolex, Omega or Patek.

Luxury watch for lovers of tech and timekeeping

When you buy an H. Moser watch, you’re paying for more than that in-house movement. You're paying for the finish. The time of construction. The precision. Just because this model looks very similar to an Apple Watch, that doesn't make it inexpensive.

I’m an avid watch collector. While my collection is humble, to say the least, being able to try out any H. Moser watch is an honor.

Swiss Alp Watch Zzzz I tried is a prototype rather than a functioning watch. But it gave me a feel for the build quality and looks that will be present in the limited run of 20 watches.

This watch is designed for a collector who loves both technology and horology. Merging those interests is a stroke of genius from H. Moser.

All of this makes Swiss Alp Watch Zzzz a compelling piece for any collector with plenty of money in their pocket.

If I had that kind of spare cash would I buy this watch? To be completely honest, no. But that’s not because of the watch's quality — it's due to my tastes. (My grail watch is an Omega Seamaster Planet Ocean.)

But is the H. Moser Swiss Alp Watch Zzzz worth the $26,900 asking price? To the right person, absolutely.

Where to buy: H. Moser

Cult of Mac received a prototype watch from H. Moser for this review. Read Cult of Mac’s reviews policy.