The days of Macs avoiding the fate of the rest of the ailing PC industry may be over. 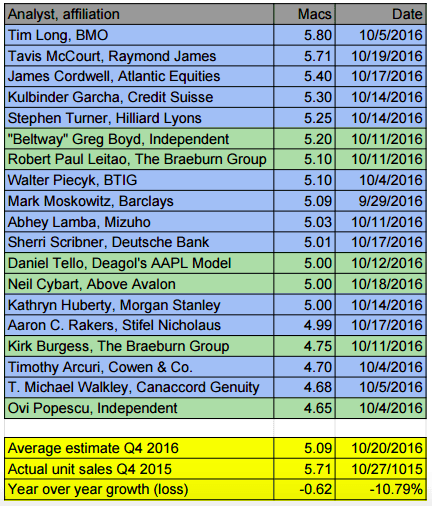 The analyst roundup comes from long-time Apple reporter Philip Elmer-DeWitt. Their estimates of quarterly Mac sales cluster around the 5 million mark, and average at 5.09 million units for the quarter. By comparison, this time last year saw Mac sales of 5.71 million — which would make this a quarterly decline 0.62 million, or 10.79 percent.

As Elmer-DeWitt writes, “For the aging Mac line, which limped though its big back-to-school September quarter without a refresh, the results are not expected to be good … The Mac can usually be counted on to outgrow the rest of the PC industry, even in a bad quarter. Not this time. Not even close.”

Of course, the real test is going to be next quarter, when Apple gets a sense of how popular the new Macs it will unveil this Thursday prove to be. The new lineup is expected to include a refreshed MacBook Pro, and maybe new MacBook Airs and iMacs.

Macs haven’t represented anywhere close to the bulk of Apple revenue since the days of the iPod, but — as Elmer-DeWitt notes — they have always proven to be capable of defying the rest of the PC industry. The strength of Mac sales has traditionally hinged on the quality of Apple’s products as well as the “halo effect” of the company’s ecosystem.

Why do you think Mac demand is slowing? Leave your comments below.