If you didn’t catch Steve Jobs in theaters (and, based on the box office, chances are you didn’t!) Universal Pictures Home Entertainment today released the movie on Blu-ray and DVD.

Extras for the controversial, somewhat divisive film include an “Inside Jobs: The Making of Steve Jobs” bonus feature, and audio commentaries from director Danny Boyle, writer Aaron Sorkin and editor Elliot Graham.

And, hey, if you don’t feel like shelling out for it, you can always enter our free giveaway here. 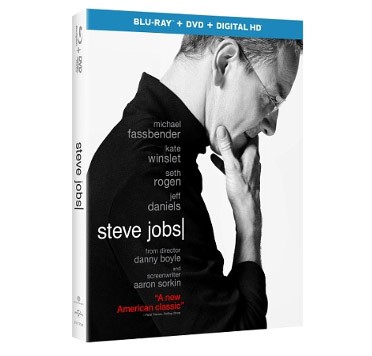 Steve Jobs is based on Walter Isaacson’s best-selling 2011 biography of Jobs, but takes considerable liberties with the source material. As a Sorkin fan, I thought the “backstage happenings at three keynotes” concept was interesting, but the movie itself was pretty far from being a factual take on Apple’s late founder and former CEO.

That hasn’t stopped it from picking up multiple award wins, however, with the most recent being a BAFTA award for Kate Winslet, who plays the role of Steve Jobs’ PR guru Johanna Hoffman.

It is likely that Winslet will also receive an Oscar for her contribution to the movie.

Have you seen Steve Jobs, and if not will you be picking it up now that it’s available on home video? Leave your comments below.