The whole tech world is losing its mind with Star Wars mania, and Apple’s no exception. Hidden within Siri is a neat reference to George Lucas’ epic space opera — accessible when you use the iconic “I am your father” line from the end of The Empire Strikes Back.

Check out some of Siri’s best responses below. 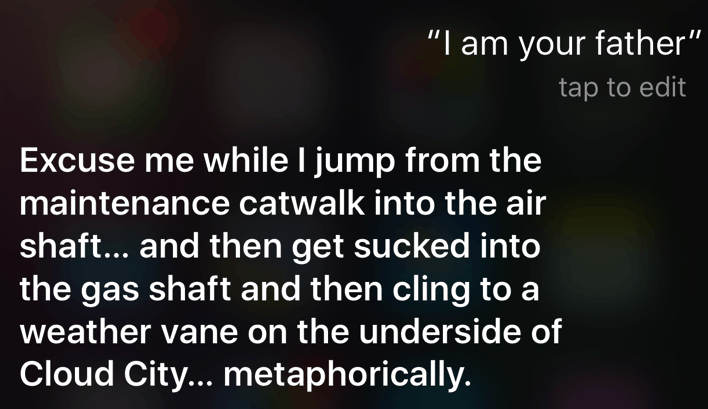 And my personal favorite, which crams in an added reference to Family Guy…

As noted, Apple’s not the only tech giant apparently counting down until The Force Awakens hits theaters. Recently Google unveiled a cool new Easter egg which gives you search results inspired by the Star Wars opening credits scrawl when you Google the words, “A long time ago in a galaxy far, far away.”

Siri’s no stranger to hidden movie references, of course, but I’m pretty sure this is a new-ish one. Discovered any other cool Star Wars references? Let us know in the comments below.