The iPhone 6s is so fast, not only does it destroy the iPhone 6 in speed tests, it tops the iPad Air 2 and every Android device on the market, according to initial benchmark tests.

Apple’s engineers managed to make some huge GPU improvements on the iPhone 6s thanks to new technology that allows the the A9 chip to deliver higher performance and lower power consumption. According to early benchmarks by tech gurus at AnandTech, all the improvements add up to make the iPhone 6s nearly twice as fast as the rest of the industry.

In some benchmarks, the iPhone 6s nearly tops the Surface Pro 3: 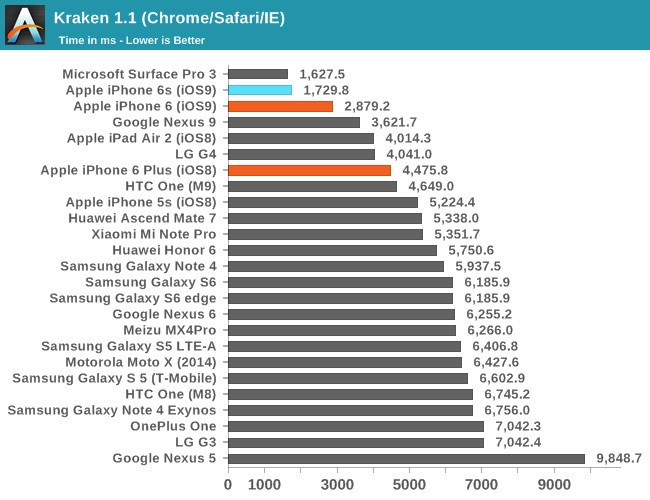 One big reason why the iPhone 6s is so fast is Apple did something radical with the way it handles writing data to the solid state drive (SSD). The iPhone 6s uses a SSD storage controller that’s more akin to what a MacBook uses than anything rival smartphones are using. Apple has effectively taken the MacBook SSD controller and adopted it for a smartphone.

“Overall, NAND performance is impressive, especially in sequential cases,” writes AnandTech’s Joshua Ho. “Apple has integrated a mobile storage solution that I haven’t seen in any other device yet, and the results suggest that they’re ahead of just about every other OEM in the industry here by a significant amount.”

iPhone 6s battery life dropped off a bit from the iPhone 6 in initial tests, but AnandTech says it might actually do better after more extensive testing.

The GPU improvements are made possible by new 14mm process technology from Taiwan Semiconductor Manufacturing Company. More tests need to be run to see how the iPhone 6s truly stacks up to the competition but at first glance, it appears it might take a year before the competition catches up.