Unlike many previous must-have tech gadgets, the Apple Watch doesn’t just have one killer app — but many. So what exactly do owners use their Watch for then, and how does this stack up against Apple’s stated goals for the device?

A new survey released by analysts at Wristly charts the usage of around 2,000 Apple Watch owners, and reveals a few intriguing insights into the most and least popular uses for Apple’s debut wearable device.

The conclusions? Checking the time and monitoring activity = Hot. Using it as a next-gen communication device = Not. 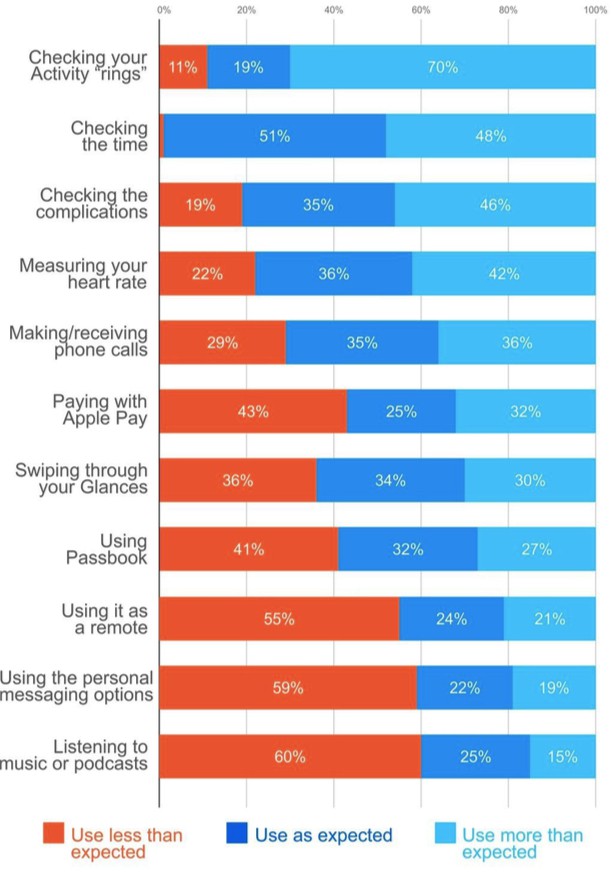 Of course, this doesn’t necessarily mean that listening to music and podcasts, or using the personal messaging options won’t catch on over time. It could well be that users have little interest in sending their heartbeats to one another, but all it will take is the arrival of one new Snapchat-style app to turn the Apple Watch into the Dick Tracy-like communicator we’ve always wanted. Or that tomorrow’s Apple TV refresh will suddenly transform the Watch into the perfect remote control.

Still, if you’re a developer looking to direct your focus into one type of app, Wristly’s survey is definitely interesting.

Are you an Apple Watch owner? If so, how does your usage of the device marry up with the above chart? Leave your comments below.