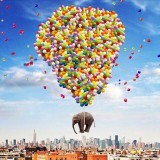 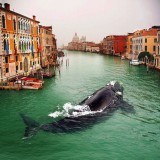 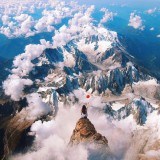 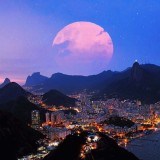 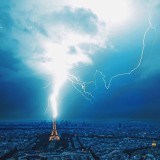 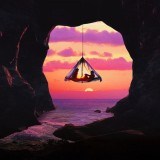 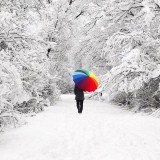 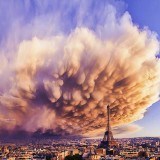 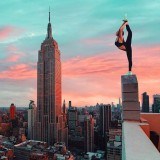 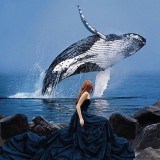 A brilliant white lightning bolt strikes the Eiffel Tower in Paris. In Venice, Italy, a whale splashes joyfully through a street system made up of canals. In New York, an elephant is lifted high into the sky by a mass of colored helium balloons.

These may sound like the most fanciful of cheese dreams, but they are, in fact, the work of a fantastic artist double-act: German-born Robert Jahns and his iPhone.

Using his iPhone to assemble his surreal masterpieces, and then posting the resulting pictures to Instagram under the name nois7, Jahns is taking the art world by storm. And like many contemporary artists, he couldn’t have done it without his trusty Apple device.

27 year old Jahns began editing pictures on Adobe Photoshop when he was 13. Everything changed for him a few years ago when he bought a secondhand iPhone 3G from a workmate. “I was totally excited about it,” he says. “As a freelance art director, I’m really into design. I loved the clean and simple user interface design by Apple, and felt very comfortable with it immediately.”

“Really I just download some apps I think sound interesting and play around with them for some time.”

Currently Jahns uses the iPhone 5s, although he says that he plans to switch to the iPhone 6 soon. “A big display is handy for me, but the 6 Plus is too big for my taste,” he says.

For editing his images he uses several different apps. “I use different combinations depending on what what I want to create,” he says. “The most important app is called ArtStudio, which is a tool for professional editors. I also use Filterstorm, VSCO Cam, and Photoforge 2.”

As the iPhone’s camera has gotten increasingly good (the iPhone 3G sported only a 2.0MP rear camera), Jahns shoots more and more of his source photos using the device, too. To help take top quality photos he opts Camera+, Cortex Camera and some long-shutter apps like Average Cam.

“Really I just download some apps I think sound interesting and play around with them for some time,” he says. “If you want to try composing some of your own images, I’d recommend starting with simpler apps like Image Blender or Superimpose.”

His complex images take around 2-3 days of part-time editing to achieve. Previously he used to start out with a hand-drawn scribble to guide the creation process, but today he says that all of this takes place within his head.

“I get inspired by everything that surrounds me,” he explains. “Often I can get an idea for a new image in just a second — from whichever sound, texts or images I see around me. I make sure to stay creative every day.”

Apple has long been associated with what the American economist and social scientist Richard Florida once named the “creative class.” Thanks to early Apple employees (and Steve Jobs mentors) like Alan Kay, Bill Atkinson and Larry Tesler, tools that would have been available only to a select few well-funded creatives became software packages for the Macintosh.

But Macs also typically operated in a what is called a “high-right” bracket of the market, meaning that they won out on both specs and price. The iPhone may be far from the cheapest smartphone on the market, but it is also far more ubiquitous than Macs ever were.

The iPhone makes creativity-on-the-move a reality

In this way, artists like Robert Jahns represent the next step in Apple’s democratization of creativity. First, the Mac made the tools of higher-end creatives accessible to lower-tier creatives. Now the iPhone makes them accessible to everyone.

Of course, as Jahns points out, the real advantage of the iPhone as a photo-taking and editing device is its sheer portability. With an iPhone, artwork is liberated from the formal studio and gallery. It’s no coincidence that one of Apple’s recent ad campaigns has focused on turning select brick-and-mortar Apple Stores into art galleries.

Jahns isn’t the only person to appreciate the easy portability of the iPhone, which makes creativity-on-the-move a reality. In May last year, Bentley debuted its new ad, which was shot using an iPhone 5s, and edited from the back seat of a car using an iPad Air.

“If you are looking to capture something candid, people are so used to seeing mobile devices that their reaction time is slower,” he told TIME magazine. “You have a better chance of getting the shot, and that was the case at the White House.”

“The iPhone is a really powerful device even if it comes to graphic design or making compositions,” says Robert Jahns. “I like being able to create my art on the go. The iPhone’s a great tool for artists. Its combination of the apps and camera image quality is insane.”