The iPhone 6’s NFC chip has been spotted for the first time, according to images of an supposedly leaked iPhone 6 logic board that’s been fully assembled with Apple’s next-generation A8 processor, NFC chip, and another chip from Avago Technologies.

Previous leaks have shown the iPhone 6’s bare logic board, but the images from Feld & Volk give us our first look at some of the new chips. The new 2Ghz dual-core A8 chip is expected supposed to be much faster and smaller than the A7 in the iPhone 5s.

Here’s a shot of the NXP’s tiny NFC chip that could also make an appearance on the iWatch: 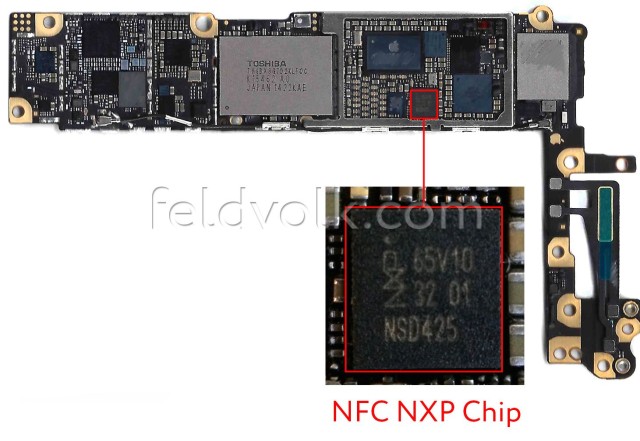 NFC is expected to play a crucial role in Apple’s new mobile payments platform that will debut at the iPhone 6 event on September 9th. Apple may also include the mobile payments tech in the iWatch as well, so that all users have to do is pull out their iPhone to make purchases at retail stores.

Feld and Volk have released a series of high quality iPhone 6 leaks throughout the summer, and while we can’t confirm that this part is 100% genuine, it’s most likely is the real deal.

Apple announced yesterday that it will unveil its next generation iPhones at the Flint Center in Cupertino on September 9th. The new mobile payments system, NFC chip, and A8 processor in the iPhone 6 will also be accompanied by new features like a 4.7-inch display, sapphire glass, faster LTE, and improved camera.