An iPad case should:

The Hinge is an angle stand for the iPads Air and mini. It’s the kind where the front cover wraps around to the middle of the back, so that the hinge runs vertically up the back of the case. This lets the whole flap swing out and form a stand. In this case, the stand can be set at any angle within a 50-degree range thanks to the hinge that give the case its name.

The iPad sits snug in a plastic tray that covers corners and edges, and has openings for all switches and ports. Just this part is sturdy and strong, with enough bend to absorb some shock without cracking. The case is designed to grip the edges of the iPad’s bezel, but not its corners. This makes it far easier to get the case on and off, but doesn’t make its grip any less secure. Clever.

Then we get to the front flap, which has a fetching purple lining that almost (but not quite) cleans the screen when closed. Bring a microfiber cloth with you if smears drive you crazy. The front flap is stiff, though, providing some protection.

The added feature here is the hinge, which lets you set the iPad at any angle within a range of 50 degrees. To set the angle, you just bend it. When you let go, it stays in place. I like this hinge quite a lot. The hinge itself is stiff and holds the iPad steady wherever you set it, and because the front flap forms the base of the stand, it’s super-stable too – perfect for typing and for watching movies on soft pillows or sofa cushions.

The flap can also be wrapped around back, and then the purple lining gives enough grip to stop it from slipping off your lap, and there’s a sleep/wake magnet to lock and unlock the screen. 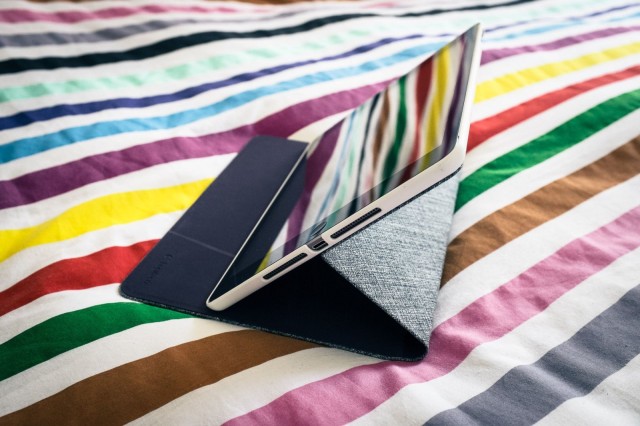 The case looks great. The woven-looking gray cover contrasts well with the white plastic shell and the purple lining to make something both stylish and understated. Hannibal Lecter might use a cover like this (and I mean the super-stylish Mads Mikkelsen Hannibal, not the overalls-and-hockey-masks version from the movie). It also feels good, with enough grip when open and closed to tuck under your arm without slipping.

If the Hinge meets your tastes, you’re good. If not, then tough, as there’s no other color option.

4. Not weighing a ton

Fail. The Hinge is a monster. I tested the iPad Air version and it comes in at 329 grams on my kitchen scale. The official weight is 335 grams. That’s almost a whole pound, or just about the same weight as the Retina iPad mini. Hell, the iPad Air alone weighs only 481 grams (on my scale).

And when you pick the combo up, you really feel it. It’s like going back to the iPad 1 and its Apple-made scuba suit all over again. It’s not too bad if you’re just carrying the case around the house and setting it down, but if you are spending a day out you’ll quickly notice the extra weight in your bag. And if you’re reading with the iPad in your hands, you will probably be removing the iPad from the Hinge case pretty soon.

It’s a shame about that weight. I understand that there’s some complex construction under the covers to make that hinge work so well (and it seems tough, too – I have taken to using the Hinge as a toy, flexing it over and over while I think), but it’s still way too heavy. Remember, the whole point of the iPads Air and mini is to be ultralight. Slipping them into the Hinge undoes all Apple’s weight-shaving.

Like I say, it’s a shame. I love using the Hinge case when I’m reading the day’s news at the kitchen table, and having such a sturdy and stable stand built-in to a case is very handy indeed. But I would never bother leaving the house with it – it’s just too heavy.