I must admit, I got pretty excited just now when I got an email from Amazon telling me that my Kindle documents had been integrated with my Cloud Drive. At last, I thought, I can easily upload personal documents and have my reading progress synced between all my Kindle devices and apps.

But guess what? Disappointment.

The integration works one way. That is, if you load personal documents onto your Kindle, those documents will now be available in your free Cloud Drive, ready to access in, well, the web site – as you’ll see in a second, the alternatives are grim.

Also, any documents will be stored in their original format. Amazon auto-converts things like DOC files to Kindle-friendly formats. It still does, but now the original is stored in your Cloud Drive. This sounds like it’s meant to be used with the rumored Amazon cellphone that will be launching soon.

If you want to do it the other way, uploading the documents to the My Send-To-Kindle Docs folder (its real name) and then sending them to your Kindle, you’re out of luck. You’re still stuck mailing the things in (if you want Whispersync to work) or just dumping them onto all your devices via USB (without Whispersync support).

Not that you would want to do it this way. I downloaded the CloudDrive app for OS X, launched it and saw this: 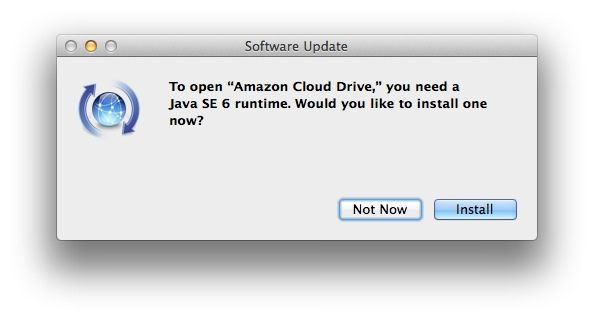 Java. In 2014. Then I tried using the web interface, which insists on signing me into the Spanish store. What did I see?

Flash! Good God Amazon. I had to launch Google Chrome just to get this to work, which is how I found out that the documents don’t propagate in the direction you’d want them to.

So, there we have it. Another ill-though-out, badly implemented feature from Amazon.