Wireless charging is a beautiful concept that fails to live up to its promise in reality. That’s not to say it’s unusable – far from it. I’d put wireless charging pads in the same place as Wi-Fi was some years back – useful when it works, but frustrating to get working properly.

The little iQi panel goes some way to fixing up the main problem of wireless charging on the iPhone. Because it’s not built in, you usually need a bulky case to pair with the charger itself. The iQi is so tiny it can be used with any case.

The iQi is a flat panel with a ribbon connector that hooks it up to a Lightning plug. You push the plug into the port on your iPhone, then either stick the little panel to the back of the phone or just slip your iPhone into a case.

And that’s it. From now on, the iPhone will start charging whenever you set it down on a compatible charging pad. This means that you never have to plug in a charger ever again. In theory at least.

Inductive charging works by creating a magnetic field in the charging pad, which then causes electricity to flow in the the induction circuits in the phone. You have probably used it when charging your electric toothbrush or maybe even on an an induction hob in your kitchen. 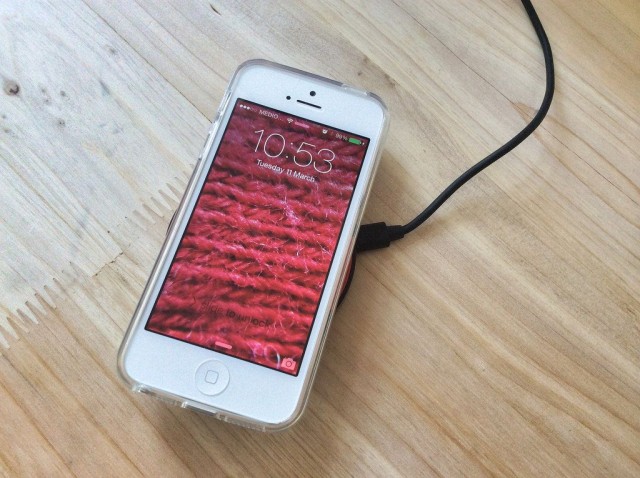 It’s pretty neat to have your iPhone start charging just by setting it down onto a pad on your desktop, or your nightstand, or your kitchen worktop. And that is one of the best parts of induction charging: Instead of buying a Lightning cable for $20 each time you want to set up a permanent charging station somewhere you can just use any old USB cable and charger and pair it with a ~$25 charging puck.

Thus equipped, you can drop the iPhone down in any room to start charging. Unfortunately that’s not quite as smooth and simple as it sounds… 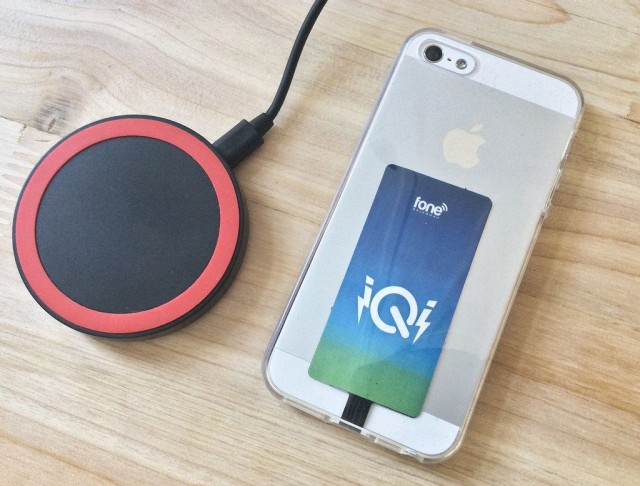 The main problem with induction charging is efficiency, or a lack of it. iQi claims an efficiency of 72–74% depending on the charging pad you use with it, compared to 68–70% if using other manufacturers’ pads. So the result is really a wash – the thickness of your case will probably affect things more.

If you’re at home using a standard USB port or charger, this probably won’t make any practical difference, but if you’re the kind of person (like me) who worries about vampire draw and the power used by electronics in standby mode, then you might worry about this waste of energy too – after all, you’re dumping 30% off all that power into heat and wasted magnetic vibes. And your iPhone will heat up when it’s charging, which is a little disconcerting, too.

The lower efficiency also means you won’t want to use this with backup batteries/ This might seem like a dumb point, until you remember that you lose all use of the Lightning port when you have the iQi plugged in.

That means no battery cases, and no Lightning accessories at all. That may or may not be a problem for you == after all, with iTunes Wi-Fi sync and iCloud backups, you may never really need the port at all.

You’re also going to have to deal with this message popping up over an over, and it seems that you have to dismiss it to get the iPhone to charge – which rather defeats the “drop it onto the pad and forget it” ethos of the device. It’s like the iQi folks set out to make a cool accessory, and when the problems kept piling on they decided to go ahead instead of just moving on to something else. Here’s the FAQ entry on the error message:

What to do when “This accessory may not be supported”? This message appears when the iDevice reaches 100% charged and the Koolpuck or Koolpad enter trickle charging mode. The iDevice recognises the reduced amps the iQi is emitting (outputting), and displays this message. This message too can be dismissed and will not affect your iDevice.

There’s another one too, although this one should only happen the first time you plug the accessory in:

What do I do when this message “This cable or accessory is certified and may not work reliably with this iPhone” appears?
This message may appear when you insert the iQi Mobile . This message might appear on some iDevices. Apple does not give certification to wireless charging devices. You only need to dismiss this message first time. This message should not reappear unless iQi is removed.

It works, but its not there yet. It’s neat to be able to use any case with the iQi, and the promise of cable-free charging is a seductive (and inductive amirite?) one. But right now the annoyances are too abundant to make this anything but a toy for the early adopter.