Apple just set a record for the most iPhones sold in a quarter, but while the new iPhone 5ses and Cs are flying off shelves, a new scam is booming in China where broken old iPhones are cannibalized for parts to build complete units sold with a full retail price tag.

According to a report from the Telegraph, makeshift iPhone factories from small shops in China’s Guangdong province have caught on to the business of illegally smuggling broke iPhones back into China and then stripping them of working components to build one complete iPhone.

“They even know how to put codes on the iPhones again to make them indistinguishable from the brand-new models. And it costs a fraction to buy up the parts and build a second hand phone rather than buying a new one.” 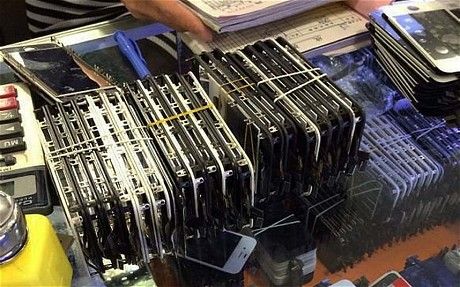 Images posted by the Telegraph show workers crowded around glass cabinets surrounded by empty iPhone cases, tools in hand, while another shows a worker adding a new protective film to an iPhone 4s.

Units are polished and inserted into fake Apple packaging so they look just like the genuine article and are even sold by reputable retailers, but the fail rate of the devices is much higher, leading to a lot of pissed off iPhone users who just want play the fifty billion Flappy Bird clones with the rest of us.

The Frankenstein iPhones look so good the only way to tell if its original is to look inside – not a common task thanks to Apple’s pentalobe screws, and of course selling a second.