A patent application published Thursday reveals how Apple could incorporate flexible OLED displays into future devices to improve their function without sacrificing strength. The technology could get Apple closer to producing bezel-less devices in existing product lines such as the iPhone, iPad and MacBook as well as speculative product categories like the iWatch.

The patent refers to a technique for reducing a display border by bending the sides of a display surface in such a way that electrode materials used in the device could be made to stretch rather than break when bent or folded. The application, titled “Flexible Displays” and filed in July 2013, means that future Apple devices need not be limited in size by the requirement that they include metal or plastic housings. 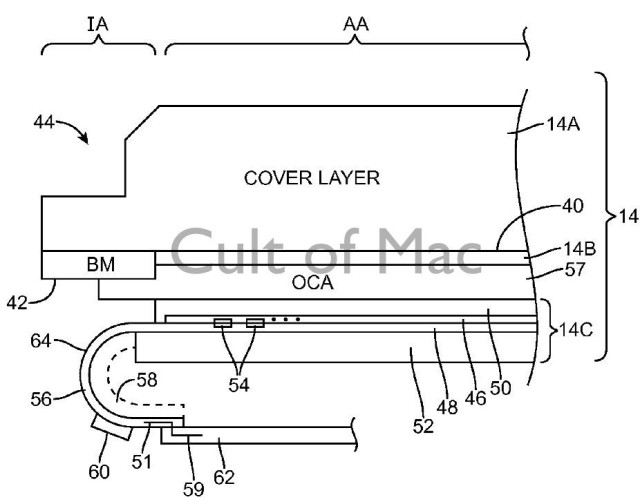 Recent iterations of the iPad have seen smaller bezels than earlier versions, demonstrating that this is a design direction Apple wishes to pursue. While it is still speculation, Apple’s “Flexible Displays” patent application lends credibility to recent insider reports suggesting that the company is testing a prototype iPhone 6 sporting an entirely bezel-less screen.

Apple isn’t the only company exploring its options when it comes to flexible displays. Both the Samsung Galaxy Round and LG G Flex demonstrate the degree of interest that exists in curved screens.

Apple has, however, taken out a number of patents in this area over the past year which demonstrate the company’s increased interest in this field.

In March 2013, Apple filed a patent for a futuristic iPhone featuring a flexible, wraparound display — and virtual, rather than physical, buttons on the side. Then late last year, Cult of Mac reported that Apple might be working on an iPhone with curved displays for release in 2014.

Apple’s “Flexible Displays” patent is much broader in application, and potentially could be used across existing and planned screen-based devices.